The U.S. has an impressive military history, something that becomes apparent when you look at how many forts and garrisons litter the American landscape. From the first landings of Europeans in what is now New England, to the Spanish colonists from coast to coast and the French imperialists to the north, the U.S. has had conflicts from the very beginning; many U.S. cities had their start as military outposts. If you want to better understand U.S. history—or experience “living” history—there’s no better way than paying a visit to at least 1 of these 10 historic forts.

Unlike some of the other forts on this list, Fort Vancouver in Washington state was established with commerce, not defense, in mind. The outpost was established by the Hudson’s Bay Company along the Columbia River during the winter of 1824–25, near present-day Portland, Oregon. In 1846, the trading post was closed as unprofitable; 3 years later, the Americans established army barracks on the same site. In 1866, the fort was destroyed by fire, then rebuilt. It remained an active site during both World Wars, and remained active until a forced closure in 2011. It was already on the National Historic Register, and had been since 1961. Today, you can tour the fort and visit some of the restored buildings, such as the Bake House and Blacksmith Shop, where workers employ historically accurate techniques in their reenactments of life in the fort. 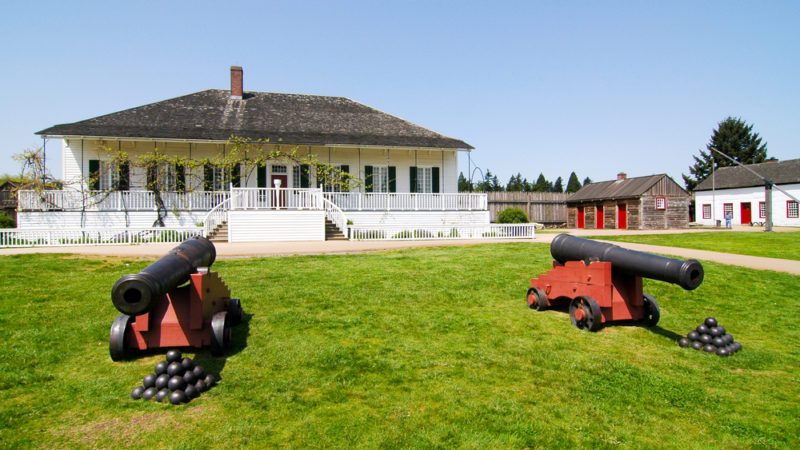 While forts are typically associated with the Eastern Seaboard and New England, as part of the legacy of British colonialism, there are forts that dot the U.S.’s western frontier as well, such as Fort Verde in Arizona. Today, the site is part of the Fort Verde State Historical Park in the town of Camp Verde. The park offers visitors a living history museum that attempts to preserve the site as it existed during the Apache Wars. In the late 19th century, settlers near the Verde River requested state protection from Native American tribes that were raiding their crops; a sudden increase in the settler population had disrupted the tribes’ traditional lifeways. Over approximately 20 years, the army built several camps and forts, until they were abandoned in 1891. Four of the 22 original buildings survived until 1956, when preservation activities began. The museum opened in 1970.

Fort Sumter is an interesting fortification along the Atlantic coast, located in Charleston Harbor, South Carolina. The fort was originally constructed after the War of 1812 as part of an American effort to protect important harbors and ports. In order to build up the sand bar where the fort is built, 70,000 tons of granite was imported from New England, although the fort remained unfinished until the Civil War broke out. When South Carolina seceded, U.S. Army Major Robert Anderson relocated to Fort Sumter. Calls for surrender of the fort were ignored, leading to the First Battle of Fort Sumter, in which the Confederates took the fort. Union forces didn’t regain control until 1865. Today, the fort is part of the Fort Sumter National Monument and features a Visitor Education Center and a museum. 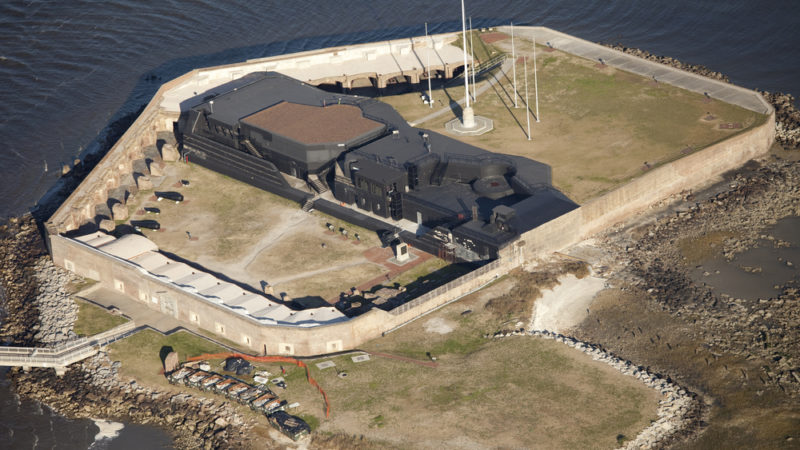 This historic fort is located on Dauphin Island in Alabama. Established in 1821, the fort is perhaps best known for its role during the Civil War, particularly the Battle of Mobile Bay. It is considered to be one of the best-preserved examples of Civil War-era masonry and the site boasts many of its original structures, including tunnels, and battle-used cannons. Also on display at the museum is the anchor from the USS Hartford, the flagship of Admiral David Farragut—the ship upon which he uttered the now famous line, “Damn the torpedoes—full speed ahead!” Historical reenactment is also part of the fort’s effort to appeal to tourists. Despite this, it is listed as one of the U.S.’s most endangered historic places: the fort has suffered damage from hurricanes, and ongoing erosion of sand dunes place Fort Gaines in danger of sinking into the Gulf of Mexico.

Fort Ticonderoga is an 18th-century, star-shaped fort near the south shores of Lake Champlain in New York state. It was originally known as Fort Carillon and was constructed by the French-Canadians during the Seven Years’ War. In 1758, the Battle of Carillon saw the French repel the British; in 1759, the French abandoned the fort. The fort saw action again during the American Revolution in May 1775, when it was captured by the Americans during a surprise attack. It changed back to British hands in 1777, but they abandoned the fort the same year. In 1781, it was abandoned for good. During the 19th century, the fort became a popular site for tourists, and private owners took steps to restore it. Today, the fort is a museum, teaching and research center and tourist attraction. The reconstructed King’s gardens were opened to the public in 1995.

Located on Pea Patch Island, Fort Delaware is a harbor defense facility. The site was first identified as a strategic defense point by the French in 1794. During the War of 1812, efforts were made to fortify the island, but construction of a fort did not begin until 1817. A major fire in 1833 caused the U.S. Army to start over again. Finally, between 1848 and 1860, the present-day fort was erected. During the Civil War, the fort served as a prison for captured Confederate soldiers. The fort was modernized during the 1890s. During the World Wars, it was garrisoned, but did not see battle. Today, the fort is a popular tourist attraction as a living history museum. In June of each year, the fort hosts an “Escape from Fort Delaware,” a triathlon event in which participants retrace the steps of 52 Civil War POW escapees.

Not much is left of the original palisaded star fort that was built in 1754 at Winslow, Maine: only a single blockhouse survives. Nonetheless, that blockhouse is the oldest surviving example in the U.S. today. The fort was 1 of the first 3 major forts built by the British along northeastern waterways, in an effort to limit Native access to the ocean. The fort was raided frequently until 1766, when it was abandoned and sold into private hands. During the American Revolution, it hosted troops on their way to Quebec. After this, the fort was largely dismantled. Tourists in the 19th century damaged the blockhouse by carving chunks of wood from it as souvenirs. Nonetheless, the blockhouse still survives and, in 2011, the Town of Winslow announced plans to develop the area around it with interpretive displays, trails and reconstructed portions of the fort.

Fort Independence has the distinction of being the oldest continuously fortified site of English origin in the U.S. Located on Castle Island in Boston Harbor, the first fort went up in 1634. It was replaced in 1701 with a structure known as Castle William. It was abandoned by the British during the American Revolution, and then rebuilt. The existing structure, a granite star fort, was constructed between 1833 and 1851. The fort was garrisoned and served as an arms depot during most of the major conflicts the U.S. has been involved in, although the federal government ceded the island to the city of Boston in the 1890s. In the 1960s, the federal government permanently deeded the island to Massachusetts, and today, the site is a state park. Occasional ceremonial salutes are still fired from the fort. 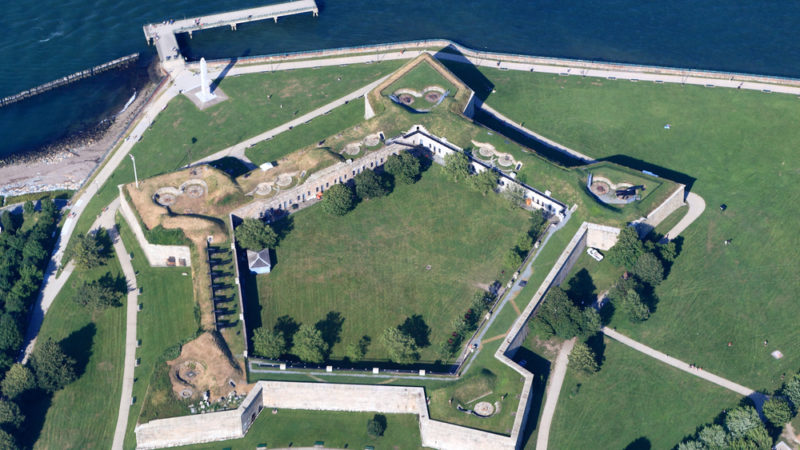 Possibly one of the most famous battles in U.S. history occurred not at a fort, but at what was originally a Roman Catholic mission known as Mission San Antonio de Valero. In 1793, the mission was secularized, then abandoned. In 1803, it was converted into a garrisoned fortress, during which time it acquired the name “Alamo.” In 1835, the Mexican army surrendered the fort during the Texas Revolution. A small number of Texian soldiers were garrisoned at the fort until the infamous Battle of the Alamo on March 6, 1836, during which they were all killed. When the Mexican army retreated several months later, they destroyed much of the fort. In 1892, conservation efforts began. After many squabbles and disagreements, portions of what had been the chapel were finally restored. Today, the Alamo is a museum that receives millions of visitors each year. 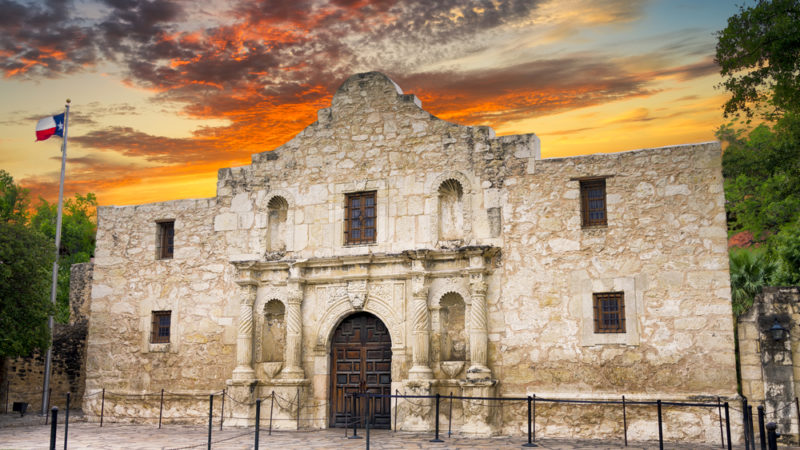 This coastal fort was originally constructed in 1798. During the War of 1812, British warships bombarded the fort in an attempt to gain access to Baltimore Harbor. The shelling went on until the British depleted their ammunition early the next morning. The small flag flown during the assault was replaced by an oversized flag to signal American victory; Francis Scott Key, a lawyer on a nearby truce ship, was moved to write a poem entitled “Defence of Fort M’Henry,” later renamed “The Star-Spangled Banner” and set to music as the American national anthem. The fort was active during subsequent major conflicts, including both World Wars, and was made a national park in 1925. The fort serves as a museum and thousands visit each year to see “the birthplace of the star-spangled banner.” 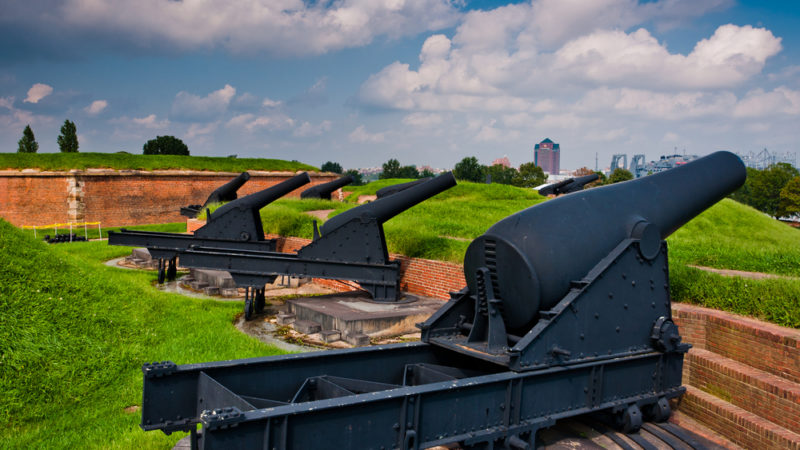 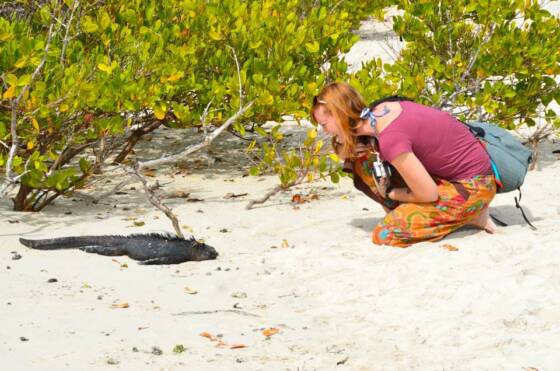 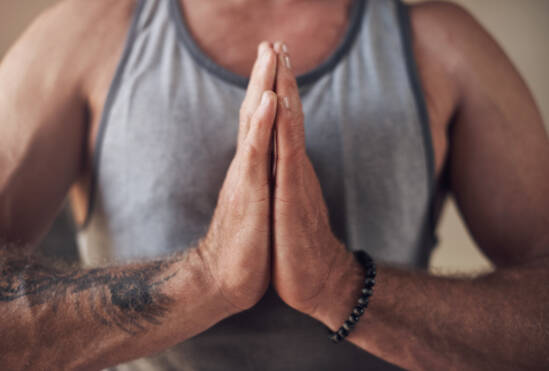 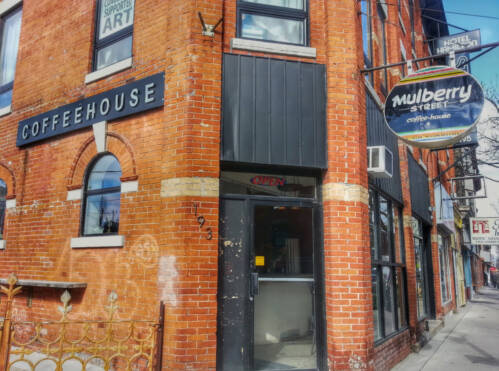 5 Most Unique Coffee Shops in Hamilton, ON 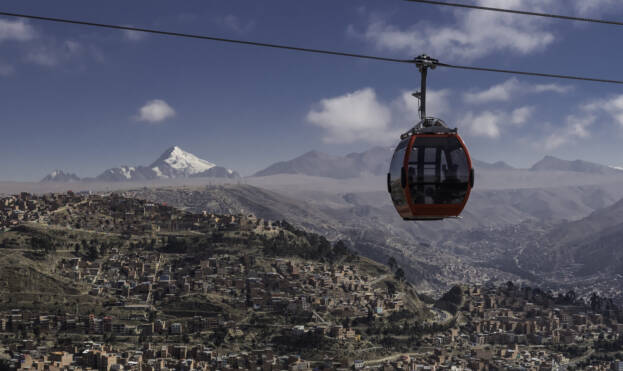 12 Days of Giving: The Gift of Less 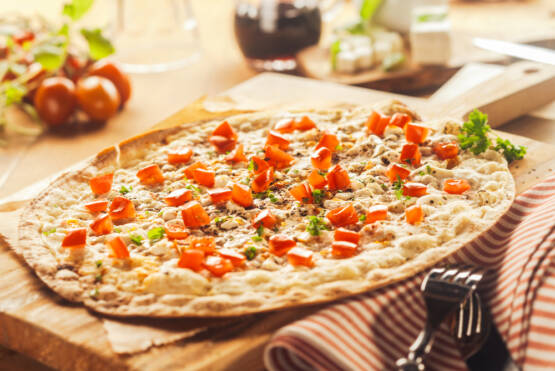 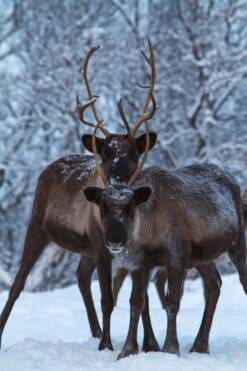 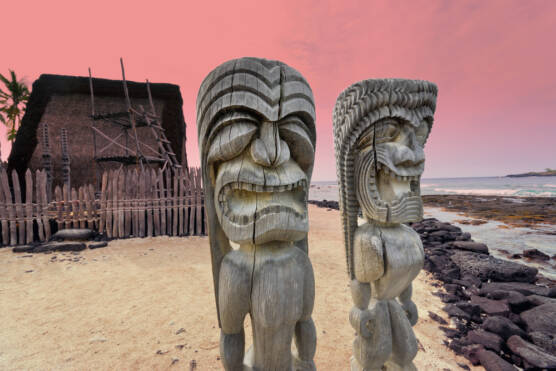