Winter has arrived and with it, ski season is in full swing once again! While many North Americans look to ski resorts in British Columbia, Canada, and Colorado in the U.S., there are others who dream of mountain vistas inspired by the most iconic of mountain ranges: the Alps. Dominating much of Europe, especially the southwestern regions, and extending across 6-plus European nations, the Alps have long captured the imagination of the Western world.

This iconic mountain range has been holding skiers and other winter sports enthusiasts captive under its spell for centuries too; some of the oldest ski resorts in the world are nestled in the Alpine ranges of France, Switzerland, Austria, and Italy, with many more entering the fray. And not for nothing—the Alps are internationally renowned for offering some of the very best skiing on the face of the earth; many Alpine ski destinations are perennial favorites among skiers of all levels. So strap on your skis, hit the slopes and discover some of the most amazing alpine ski destinations Europe has to offer.

Want an excellent snow record, extensive off-piste skiing and a wide range of groomed runs? Look no further than Salbaach. This well-known Alpine destination is located in the Austrian state of Salzburg, alongside the resort towns of Hinterglemm and Leogang. Skiing is offered on both sides of the valley, with sunnier north-side, south-facing runs preferred by tourists, although the south-side pistes are normally in the shade and have better snow conditions. Off-piste skiing is usually to the north, where thigh-deep powder can be found relatively close to the groomed runs. Spielberghorn and Hochkogel are the two highest peaks in the Saalbach Valley, part of the Kitzbuheler Alps. Saalbach has successfully hosted several international events, including the Alpine Ski World Championships.

Saalbach has 200 kilometers of groomed runs and 10 kilometers devoted to cross-country skiing. The runs are also divided up, not just by difficulty, but by type as well, including race courses, speed courses and carving slopes. Saalbach also offers moguls and a flood-lit slope for night skiing. Funcross, Skimovie courses and a Learn-to-Ride park round out the resort’s offerings, making Saalbach one of the most family-friendly destinations for skiing in the Alps. 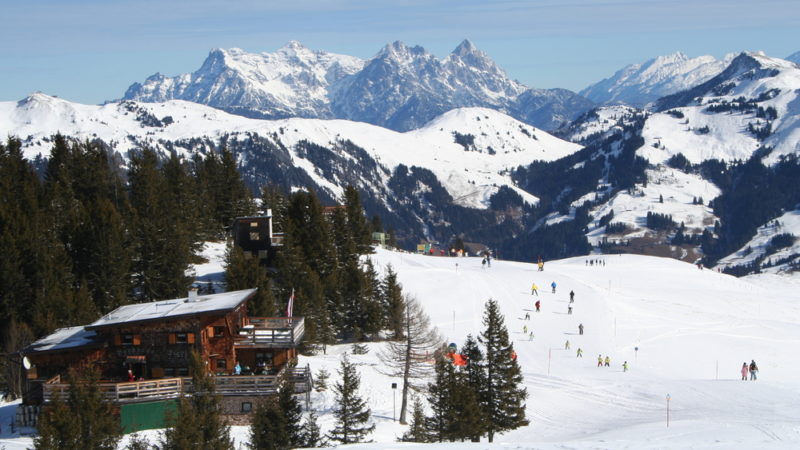 A picturesque Swiss village located almost 3,500 feet above sea level in the Bernese Alps, Grindelwald is one of the oldest Alpine ski destinations. The tiny village rose to fame in the late 1700s with the advent of Alpine exploration. Even today, Grindelwald is a popular ski destination, thanks to the diversity of runs it offers. With slopes for beginners and the Eiger glacier to challenge more advanced skiers, Grindelwald is less intimidating than some other Alpine destinations.

Grindelwald is home to 12 formidable peaks, including Eiger, Monch and the Jungfrau, and with many of them between 13,000 and 14,000 feet, Grindelwald is also home to some of the most recognizable formations in the Swiss Alps. The area is also known for its glaciation and as the home of the world’s longest downhill ski race course, the 4.2-kilometer Lauberhorn World Cup run. Visitors will appreciate the 213 kilometers of groomed piste to choose from, and some of the runs are available for night skiing while others are designated as “slow slopes” for less confident skiers.

Did you know that the Winter Olympics were held for the first time in 1924, in Chamonix, France? Chamonix wasn’t selected without good reason; it’s home to Mont Blanc, which, at almost 16,000 feet, is the highest European mountain west of Russia and the highest mountain in the Alps.

Chamonix was already a mecca for winter sport enthusiasts before the Olympics came to town, and it continues to attract 5 million visitors per year even today, many of them thrill-seekers who engage in ice climbing, extreme skiing and other extreme sports. Chamonix is popular in the summer as well, with mountaineers, mountain bikers and hikers, who can travel the Haute Route to Zermatt. Chamonix is also famous for its cable car up to the Aiguille du Midi, a peak of about 12,500 feet! From Aiguille du Midi, you can ski the famous Vallee Blanche, which descends from the peak, and the Mer du Glace glacier, both of which offer spectacular skiing. The Pointe Helbronner ski run is also nearby and continues over the Glacier du Geant. In addition to 4 ski areas, Chamonix also has several designated “beginner” ski runs. 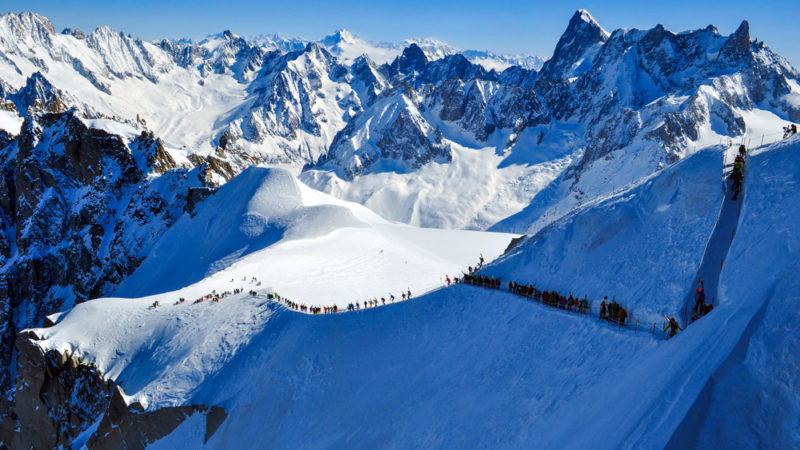 Scenic Cortina d’Ampezzo is one of the most iconic alpine destinations, known worldwide, if not by name, then due to its role as a set location in movies such as the James Bond film For Your Eyes Only and The Pink Panther. Located at the heart of the Dolomite Alps in northern Italy, Cortina d’Ampezzo hosted the Winter Olympic Games in 1956, as well as various Nordic and Alpine Skiing World Championships. The town has long been a popular resort for British tourists, upper-class Italians, aristocrats and celebrities. Audrey Hepburn was a frequent visitor to these slopes, and Ernest Hemingway began writing again in Cortina. Cortina is also a great destination for shopping, with famed designers Gucci and Bulgari among others being headquartered here.

The town is surrounded 360 degrees by the Dolomites, which are among the best and most famous alpine ski destinations—and the apres-ski scene isn’t bad either. The city itself is located at an elevation of just over 4,000 feet; the highest mountain in the area is Tofane di Mezzo, which soars over 10,000 feet. The Cinque Torri is part of the Dolomiti Superski Area, and Cristallo, with its four 10,000-foot-plus peaks, is another important ski area.

A panoramic toll road will lead you to this 6,549-foot peak in the Kitzbuhel Alps, one of the most important summits in the Austrian state of Tyrol. At its eastern flank lies the internationally renowned ski resort of Kitzbuhel, replete with 56 gondolas and lifts. Kitzbuhel gained international acclaim as the host of the annual World Cup ski races on the 5,500-foot-plus Hahnenkamm and its famous Streif slope. Many celebrities arrive in Kitzbuhel during the races, so this destination is one for those who want to see and be seen!

In the winter, Kitzbuhel is a haven for skiers, with over 150 kilometers of groomed piste, along with 40 kilometers of cross-country skiing. Hahnenkamm and Kitzbuehler Horn tower over the town. The Streif downhill slope is one of the most difficult runs. In the summer, hikers and mountain bikers will find Kitzbuhel equally welcoming; with over 300 miles of hiking trail and 75 miles of bike path, Kitzbuhel has become renowned for its summer sports opportunities as well as its winter ones. The town also hosts the ATP’s Austrian Open tennis tournament.

Ladurns is a small ski resort near Pflerscht, in the province of South Tyrol, Italy. It may seem strange to single it out as a great Alpine ski destination, especially when there are many to choose from, but Ladurns is a perennial favorite amongst advanced skiers and families alike—and it may well be one of the Alps’ best-kept secrets. Nestled in the Kwarendal Alps, near the Brenner Pass along the Austrian—Italian border, Ladurns specializes in family-friendly and large-group skiing, offering something for everyone.

Ladurns has 12 runs with a total of 15 kilometers: 3 black, 4 red and 5 blue runs offer comfort to the novice and challenges to the experienced skier. Recently, the resort has partnered with sister operation Rosskopf, which enables skiers to access another 15 kilometers of piste. Open from December ‘til April, the resort has remained quiet and tranquil, thanks in large part to its evasion of the exploitative tourism industry. Hiking and tobogganing are also popular activities. Ski tours are also available for those who crave off-piste adventures and mountain ascents. Perhaps best of all, Ladurns offers low rates! 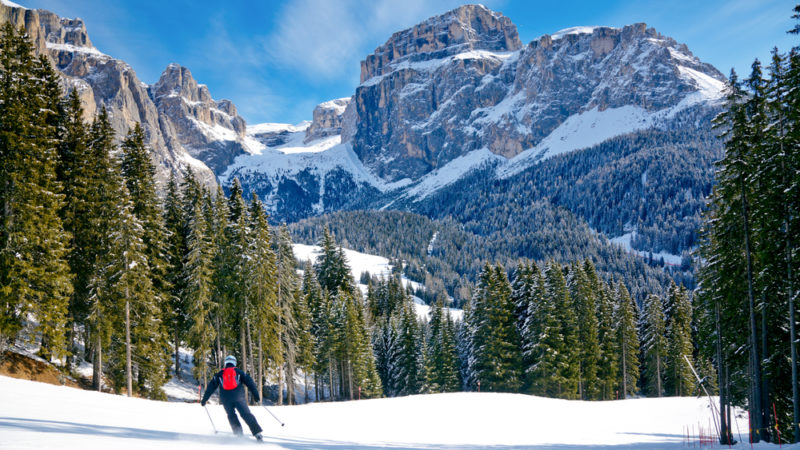 Nestled in the Austrian state of Tyrol, at the top of the Tuxertal, a side valley in the Zillertal chain of the Eastern Alps, lies the Hintertux Glacier—although the locals are more likely to tell you that there are 2 glaciers, one called Gefroren-Wand-Kees (or the Tuxer Ferner) and the other named Riepenkees. Accessible only via gondolas and lifts, the glaciers straddle the twin Gefroren-Wand-Spitzen peaks, which rise to a height of 10,660 feet.

Hintertux is popular with tourists and open year-round thanks to the elevation (which guarantees sufficient snow coverage even in the summer), and is a haven for both skiers and hikers alike. With 40 groomed runs of varying levels, and fantastic off-piste skiing available at the Larmstange ski run, Hintertux is a favorite among winter sports enthusiasts. Skiing on the glaciers continues into the summer and one can find both expert and novice skiers during the warmest months of the year. The area is also popular with mountaineers, who enjoy the spectacular view in both winter and summer, and can explore the 10-kilometer long Spannagel Cave, the longest in the Austrian Central Alps. 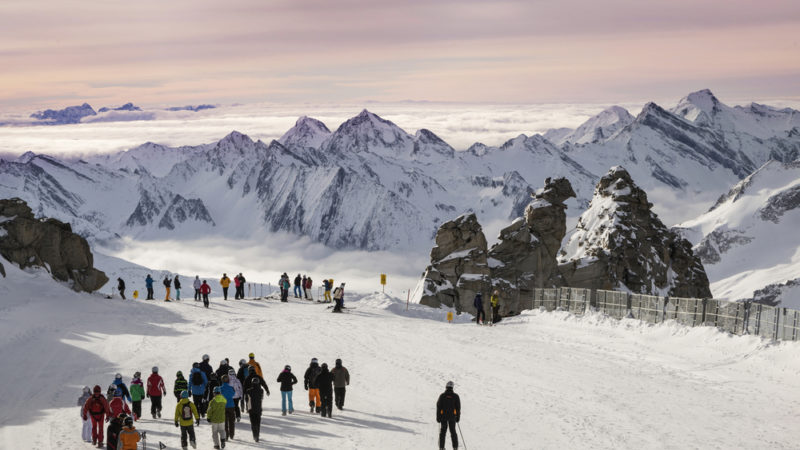 It’s no secret that the Tarentaise Valley in France is home to some of the world’s best skiing. As the name implies, Les Trois Vallees is a ski region, rather than a single resort, composed of 3 interconnected valleys: Saint-Bon, Allues and Belleville. The valleys connect to each other via lifts and gondolas and, with only a single ski pass required to hit the slopes in all 3 valleys, Les Trois Vallees is the largest ski area in the world. With a weekly lift ticket, you can even get one-day access to either the Paradiski or L’Espace Killy resort, both of which are also in the Tarentaise, but with world-class resorts like Meribel and Val Thorens, Les Trois Vallees is more than sure to please all on its own.

The area boasts over 350 miles of ski slopes and 75 miles for cross-country skiing. Val Thorens, the highest of the 3 resorts, is usually open from mid-November to May. Val Thorens also boasts the highest skiable peaks with Pointe du Bouchet and Cime de Caron measuring in at almost 10,500 feet. Courchevel, in the Saint-Bon area, is well known as an exclusive resort for the ultra-rich. 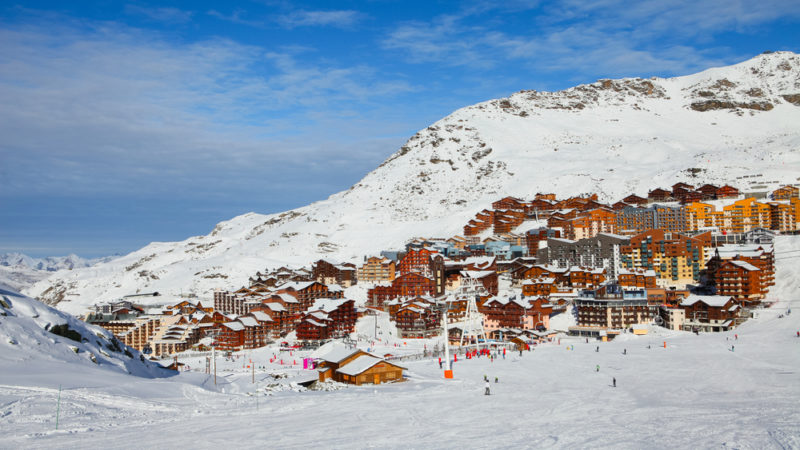 The one that started it all! The alpine village of Zermatt, located in the Bernese Alps in Switzerland’s Valley of the Rhone, near the Italian border, was “discovered” by British mountaineers in the 19th century. The village became famous after Edward Whymper conquered the formidable Matterhorn in 1865. A boom in tourism followed, and the flow of tourists hasn’t slowed since; Zermatt is renowned for its skiing throughout the world. Skiing is divided into 4 areas: Sunnegga Paradise, Gornergrat, Schwarzsee and Klein Matterhorn. Triftji is renowned for its moguls, while the Klein Matterhorn, a peak on the ridge between the Matterhorn and Breithorn, offers spectacular, 360-degree views from almost 13,000 feet.

Zermatt can also be skied in the summer thanks to the Theodul Glacier, although you’ll have a better choice of runs in winter. Zermatt is also popular with hikers during the summer months as it connects to the Haute Route from Chamonix, France. Gondolas and lifts abound and the Gornergratbahn, a rack railway, runs up to the summit of Gornergrat. At 10,314 feet, the Gornergratbahn is the highest rack railway in Europe. 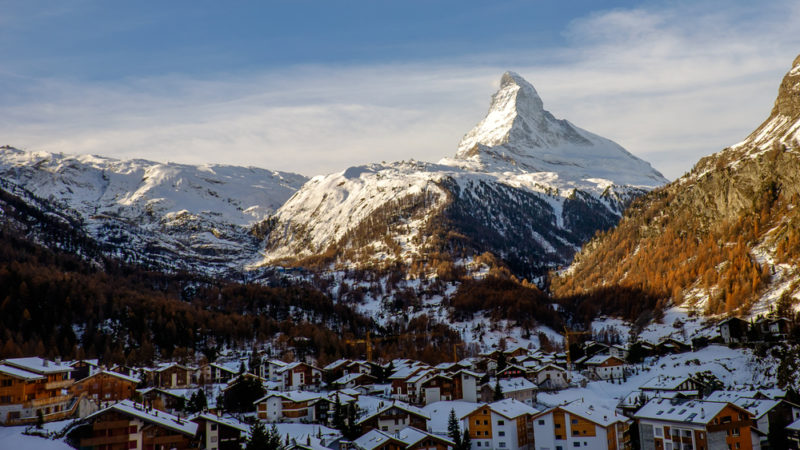 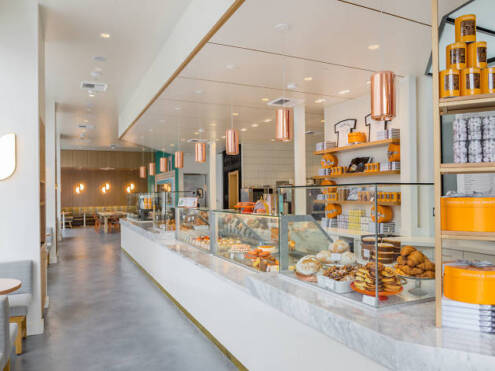 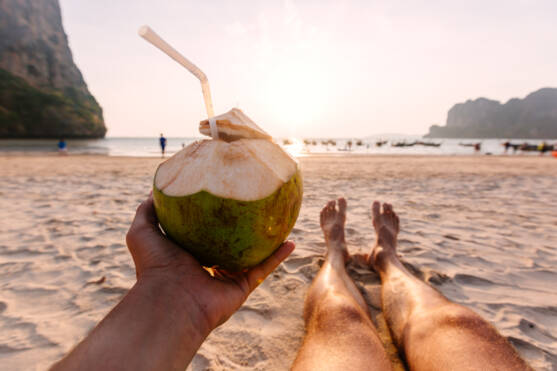 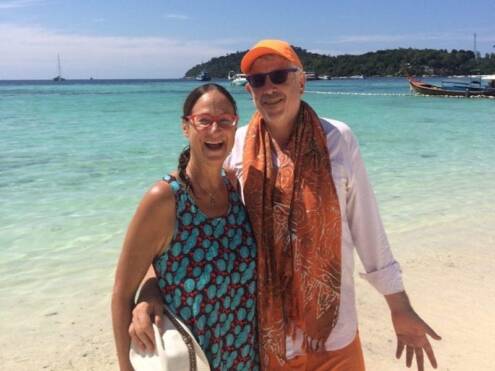 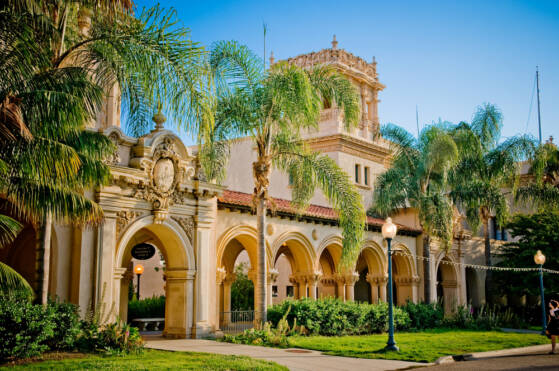 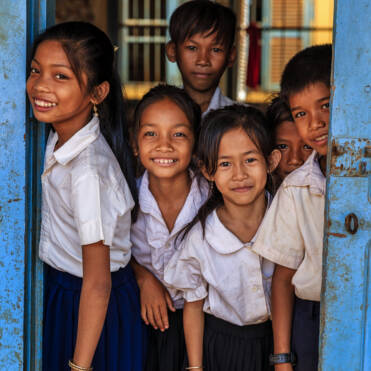 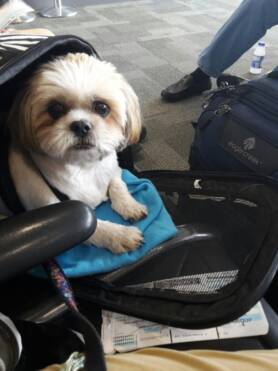