Palm trees, coral reefs, white sandy beaches, and turquoise waters: all the essential ingredients for the quintessential paradise. With 22,940 miles of pristine coastline, Australia has some of the most beautiful beaches in the world. In fact, surfers come from all over the world to surf its glorious waves. For Australians, beach going is a way of life and plays an integral part of their culture. On the weekends and during holidays, the beach is to go-to spot for partying, Aussie style. From the urban metropolis of Sydney to the Gold Coast, a surfer’s paradise, discover 10 of Australia’s most popular beaches.

The protected cove is dotted with rows of colorful pastel bathing boxes along the shoreline, basically little sheds for changing. Dating back to the 40s, these historic Victorian style cottages are the jewel of Brighton and are priced as much as a house. The bathing sheds were built in an effort to keep the beach civilized and today make up an iconic beachscape that’s’ instantly recognizable in views from Victoria. For first time visitors, a walk on the beach will surely be interrupted with the constant impulse for picture taking. With its tranquil waters and constant ocean breezes, Brighton Beach is also the perfect spot for a quiet day at the beach, an afternoon lunch at one of the cafes, and a view of the boats in the harbor from the Middle Brighton Pier. 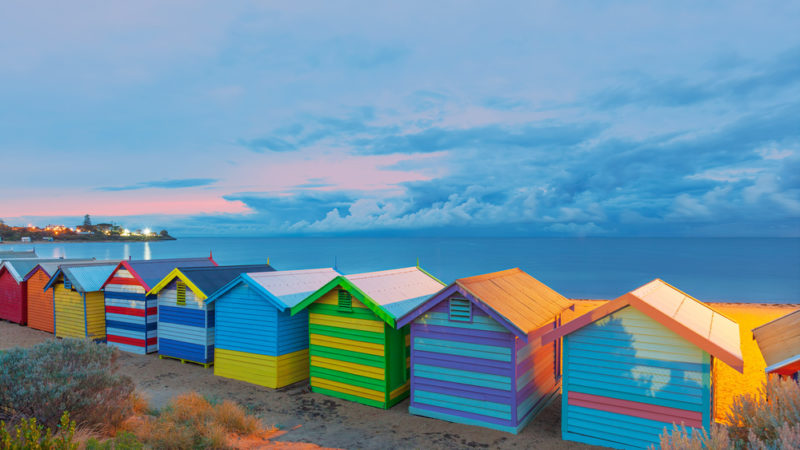 St. Kilda Beach in Melbourne isn’t known for its surf, but with its blustering wind, it’s a hotspot for kite and wind surfing. With its nearby hotels, restaurants, and bars, it’s also one of the liveliest beaches in Australia. You’ll find most people lounging on towels or under umbrellas, although rollerblading, sailing, and beach volleyball are other popular activities. After you get your fill of sun, head to the nearby St. Kilda Pier and St. Kilda Baths, two iconic landmarks of Melbourne. With amenities close by and a trendy nightlife scene, St. Kilda is perfect for beach partiers and windsurfers. A tranquil paradise by day and a bustling party mecca by night, St. Kilda Beach is a top spot for the Australian beach experience. 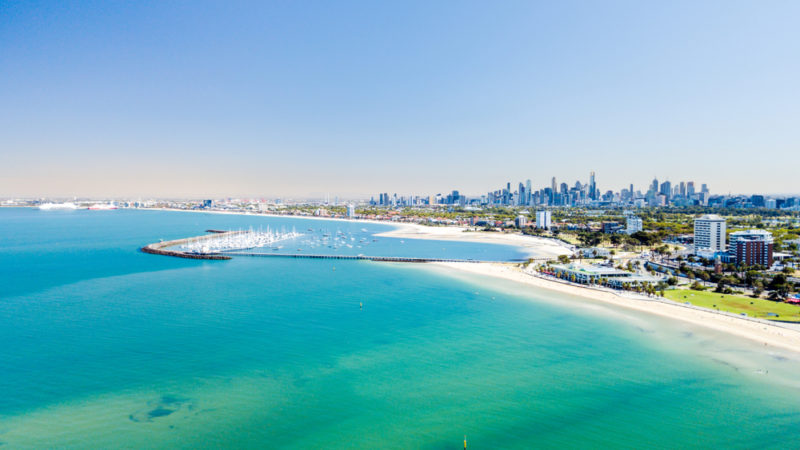 Located on the Gold Coast near the border between northern New South Wales and Queensland, Surfers Paradise draws people from all over the world who flock here for its world famous surfing and bustling beach town scene. With its perfect emerald waves, the smell of salt and summer, and year round pleasant weather, the surfing hotspot has earned its name since it became established in 1933. After the sun sets, one of Queensland’s most popular beach towns comes to life with pulsating nightclubs and historic bars. It also host surf competitions, including the prestigious Coolangatta Gold and Surf Life Saving. For experienced surfers, sunbathers, and partiers, Surfers Paradise is the good-times hotpost of Australia. 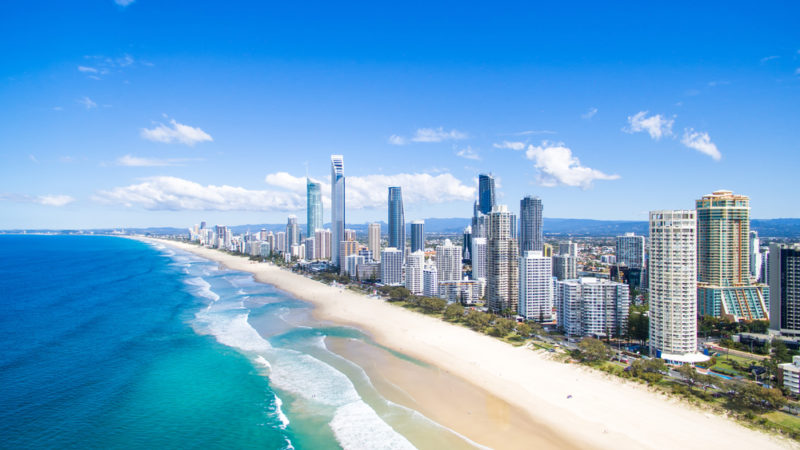 In the southernmost area of Australia is Tasmania and its Freycinet National Park, a highlight of the area with its rugged beauty on the east coast of the Freycinet Peninsula. A few hours by car from Launceston, the isolated Wineglass Bay is far from the more populated Australian beaches but is captivating with its pink-granite peaks and gentle, turquoise waters. Because of its sheltered location on the coast, the bay remains largely untouched despite the region’s growing popularity. Outdoor activities abound, including snorkeling, exploring rock pools, yachting, and kayaking, all great ways to witness the diverse wildlife and scenery typical of the region. 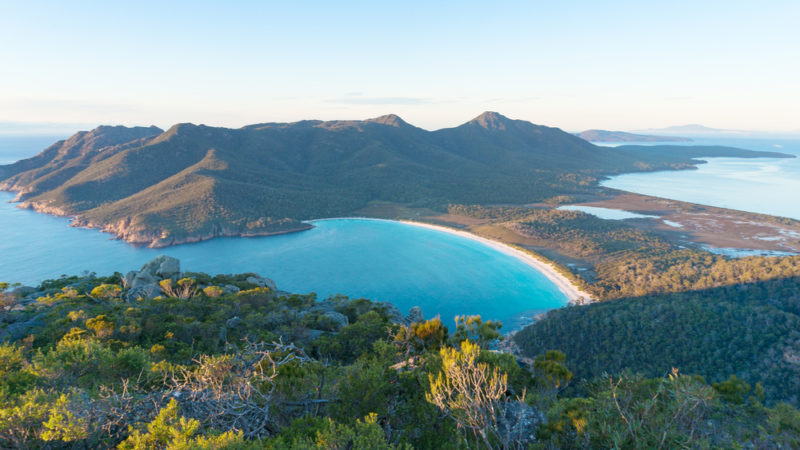 With sunny days year round, beach lovers can splash in the waves and soak up an abundance of sun at Sunshine Beach, a coastal paradise on the Sunshine Coast, the less-populated neighbor of Australia’s Gold Coast. The beach stretches north from Brisbane and is known for its natural beauty and untouched waters. A great way to get into the Aussie state of mind is a morning surf lesson followed by a beachside barbeque or a

Situated in the heart of the Great Barrier Reef are the Whitsunday Islands, a mix of resort islands and tropical secluded beaches. Resorts on the islands range from eco-tourism and pure luxury to family friendly, the most popular being South Molle, Hook, Long, Hamilton, One and Only Hayman, Lindeman, and Daydream Islands. The most cherished highlight in the area and the entire country is the Great Barrier Reef, a World Heritage Site and one of the seven natural wonders of the world. Considered the world’s largest living structure and healthiest reef system, the glorious corals can be seen from space. For the scuba diving adventure of a lifetime, take a charter boat to see the corals and an occasional Minke whale up close. 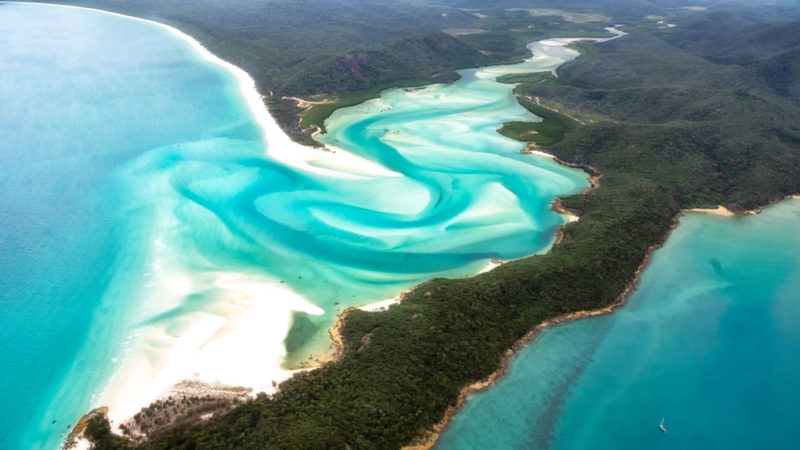 Situated on the easternmost point of the Australian mainland, Byron Bay earns its nickname “Lucky Country” for its sunny, relaxed surfer vibe and a popular pit stop for backpackers looking for a good time. With abundant amounts of sunshine, perfect waves, and a great nightlife and restaurant scene, Byron Bay is a must-see for the adventurous traveler. If you happen to be there on a Sunday, stop by the bustling market on Butler Street when the street opens up to pedestrians once a month. As far as beaches go, there is something for everybody. Main Beach is good for safe swimming while Watego’s Beach is known as an excellent surfing spot. Bryon Bay might be small, but it night it comes alive with rows of bars, nightclubs and restaurants. For those looking for quiet, head further down the coast to Seven Mile Beach, an isolated stretch of sand. 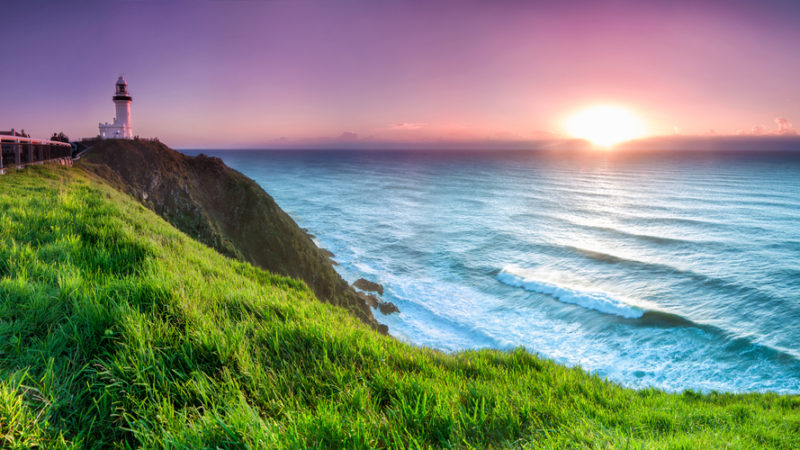 Another spot for great surfing is Bells Beach, a pristine stretch of coastline situated near Torquay on the southern coast of Victoria. Every year, the best surfers in the world flock here on Easter weekend for the Rip Curl Pro Surfing Competition. In fact, it’s also the home to major surf brands Quicksilver and Rip Curl. The excellent surf is a result of the large swells coming in from the Southern Ocean and the giant cliffs provide a dramatic landscape for surfers living on the edge. For sightseers, Bells Beach has an abundance of beautiful vantage points from rocky cliffs and gorgeous waters. The iconic Great Ocean Road bends around the southern coast, opening up to breathtaking coastline that has made Australia the premiere beach and surf destination in the world. 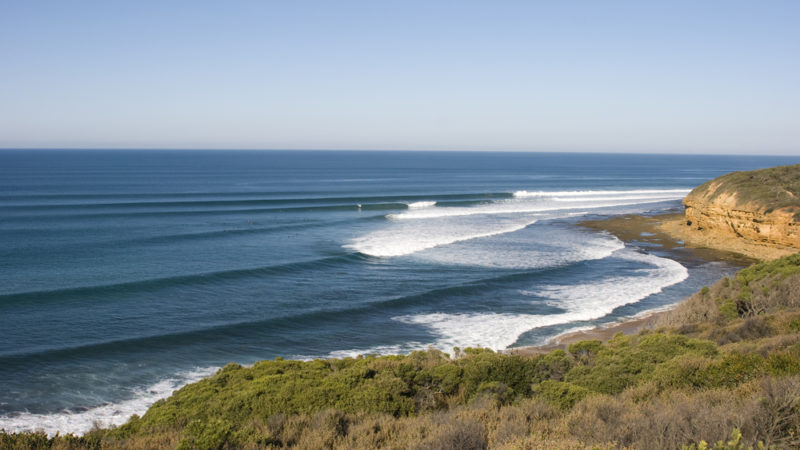 Situated near Queensland, Whitehaven Beach is a must-see on a beach tour for its crystal clear aquamarine waters and white sand beaches. It’s also one of the most photographed beaches in the country. In fact, the 2015 Trip Advisor Travellers’ Choice Awards named it the South Pacific’s Best Beach. Like many of its beaches, Australians are known for keeping their beaches clean, making them some of the most pristine in the world. A particularly beautiful spot is the Hill Inlet on the northern end, a cove with a fusion of stunning colors that shift with the changing sun and tides. For the best view of the island, head to Tongue Point at low tide to experience the peak of colors that come to the surface of the waters. For boaters, the best spot for sightseeing is Tongue Bay where anchored yachts can be found at sunset. 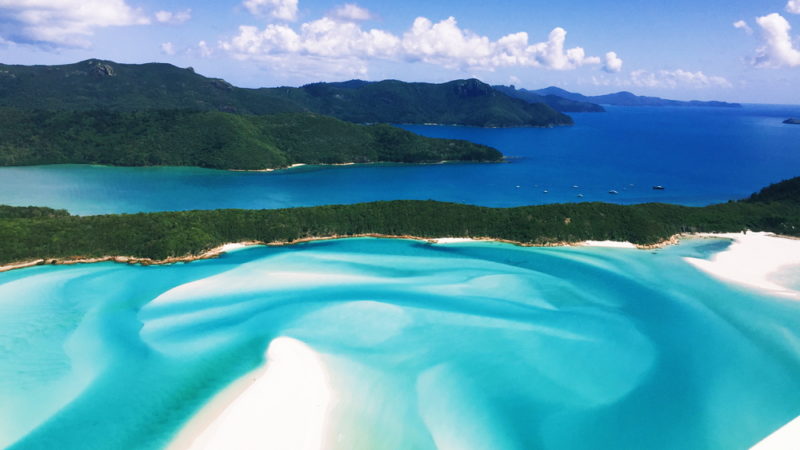 With more than 30 beaches to choose from in Sydney, Bondi Beach is the most famous and popular. Sunbathers and swimmers crowd the beaches, giving it a boisterous, holiday vibe. While surfers catch waves on the south end that curves around the windswept cliffs of Tamarama and Bronte beaches, families favor the north part of the beach for its calmer waters. Bondi Beach is also a popular spot for beach side barbequing, a favorite activity for outdoor-loving Aussies. For an afternoon snack and refreshments, head to the café and restaurant at the historic Bondi Pavillion or one of the cafes and restaurants that line Campbell Parade, a busy street just beyond the beach. For a lively atmosphere, people watching, and some of the best surf in the world, Bondi Beach is a cherished gem of Sydney. 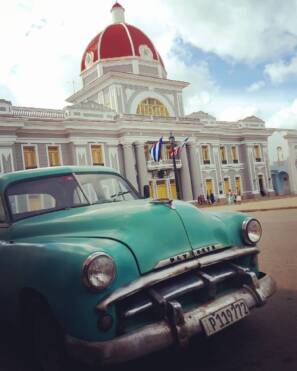 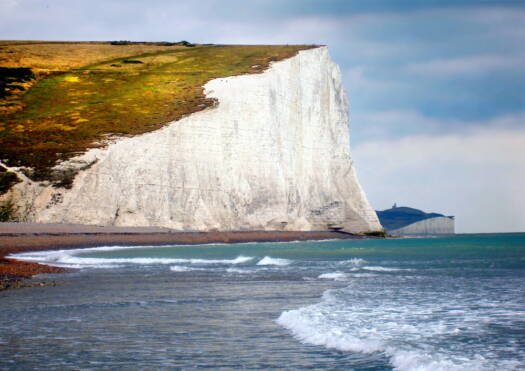 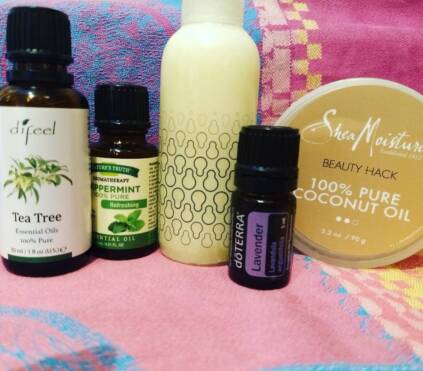 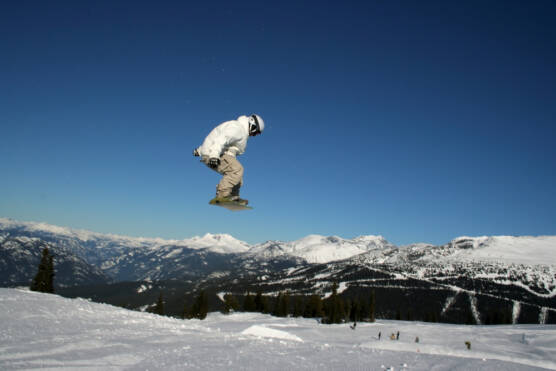 10 Must-See Landmarks in the US 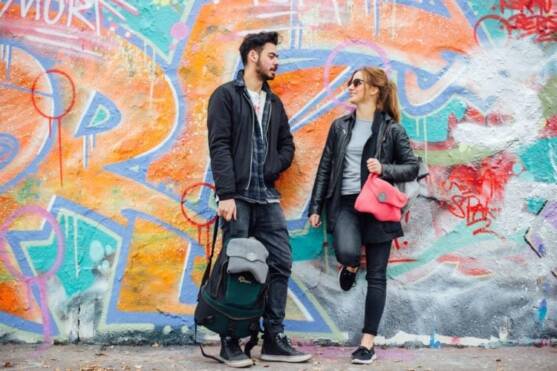 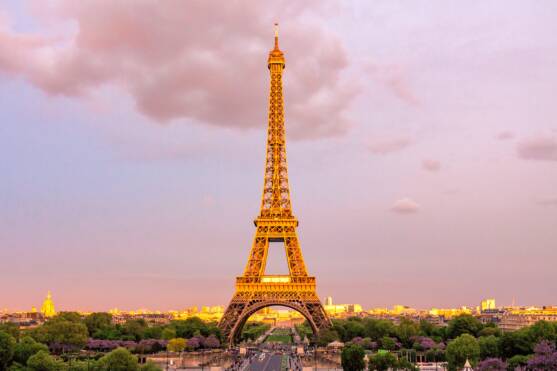