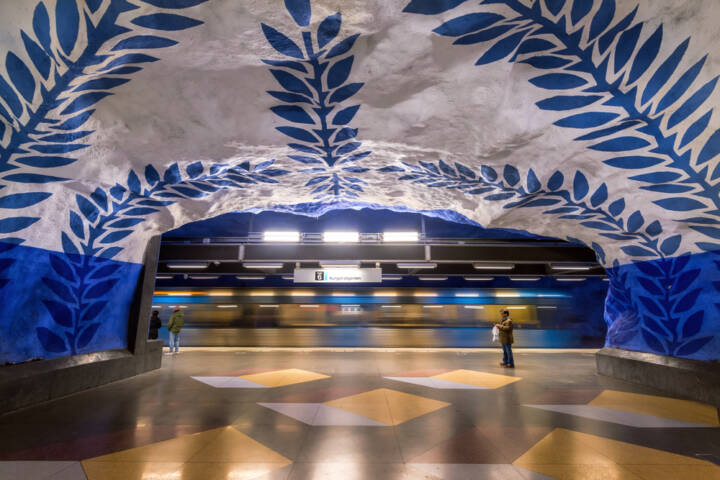 Metro stations are often thought of as being dingy, dark, and sometimes unsafe and generally not a place that you would want to hang out in. But those who think of metro stations this way must not have visited any of these unbelievably breathtaking ones. From the world’s largest art gallery to a station that has been shut off to the public for years, to a station with gold-plated walls; here are the 12 most beautiful metro stations in the world.

With a name deriving from a Finnish word meaning “middle of nowhere”, Avtovo is an industrial region that is often overlooked by tourists. But the Avtovo station located underground looks more like a small museum on the outside and offers incredible beauty on the inside. The platform houses ornate glass pillars and a mosaic dedicated to the Leningrad Blockade, and more than one million people who died in the 87day siege of the city by Nazi forces during WWII. The walls are faced with white marble and the domed roof provides a feeling of being in an elegant ballroom, not a metro station. Chandeliers hang from the ceiling and provide soft lighting, a warm welcome to the usual harsh underground lighting. It is actually illegal to take a photo in a Russian subway station so remember just look with your eyes or you may be faced with a fine.

In contrast to most of America’s utilitarian subways, this gem sticks out like a sore thumb, a really pretty sore thumb. The history behind this station is interesting as Kennedy was president at the time of the planning and it’s believed that the station represented the dignity of the governments, not the cheapest possible solution. What we have now though is a beautiful crafted metro station that came from the likes of great subways around the world. The series of vaulted cathedral ceilings with coffered blocks and elegant up-lighting gives it a sense of calm and tranquility. Make sure to watch as the lights on the platform begin to throb every time a train approaches. This one of a kind station in America looks more like a church, rather than a train station. Remember, just like church there is no eating here.

This station is known as the dome of light, dubbed to be the largest glass work in the world and is overly impressive. It was designed by Italian artist Narcissus Quaglianta and took over four years to complete. The dome spans over 30 meters in diameters and features over 4,500 colored glass panels that were shipped all the way from Germany. The overall message of this piece of art is love and tolerance and has been designed to relate to the story of human life. The themes include water, earth, light and fire. This station is also home to an impressive 3-D art installation done by successful 3-D street artist Su Chia-hsien that has faded over the years but still worth a look. Try to avoid rush hour in order to gain the best pictures of this impressive metro station.

It looks more like a ballroom than a metro station and was actually inspired by a wartime speech of Stalin’s. It was constructed in 1952 and remains absolutely breathtaking with its marble pillars and mosaics. Artist Pavel Korin and architect Alexey Schusev were actually awarded the Stalin prize for their work here. Chandeliers are the lighting of choice and there are a total of eight ceiling mosaics throughout the sunny yellow paint job. This huge hall supported by columns has high ceilings, making it feel as though are in a museum rather than a metro station, even its banisters are intricately designed and pretty. Make sure to time your visit accordingly, on the weekdays in the summer tend to be the least crowded times, in order to fully appreciate the works of art throughout the station.

The ambitious Bilbao metro system took two stages to actually complete, the first from 1988-1995 and the second from 1997-2004. The system itself is known as being incredibly fast, cheap, efficient and clean and it’s no wonder why love to ride it. Designers of the metro system used natural light and intuitive space to encourage commuters to walk in the right direction without needing to rely on signage, a design that not only works, but is also beautiful. The routes are meant to flow, like a trail through a cave, guiding you to the stations. The sheltered glass canopies that pay homage to the Paris Metro are light wells during the day and beacons at night, guiding the commuter home. The glass canopy that protrudes out of the Moyua Square Station is the most well-known of all.

It took New York designer Karim Rashid to transform this subway station into the colorful, fun station it is today. Sculptures and graphic patterns line the escalators, walls and ceilings here. The curved walls are painted in bright colors, of pink and yellow while floors are a kaleidoscope of rainbows. There is a diverse academic community that travels through this station and Rashid wanted to tap into those minds, creating a space for learning while waiting for the train. Rolling LED programming is situated behind frosted glass and displays universally recognized words and transformational digital artwork takes over the platform stairways. The seating here has even been taken into consideration and is designed to look more like a landscape than furniture. If you have ever wanted to lose yourself in a sea of colors and abstract art, head to this ultra modern avant-garde type subway station.

The entrances to this station are icons of elegant public architecture but it is what lies beneath that truly amaze visitors. Walking down into this station is like walking into an old-time brass submarine. Riveted copper walls and huge gears hanging from the ceiling set the stage. Port holes along the walls are outfitted with picture boxes depicting 19th-century navigation. Sleep silver and copper chairs are fitted seamlessly against the walls and even the garbage cans fit into the scene. The station was created by Belgian comic’s artist Francois Schuiten and was based on the fiction works of Jules Verne. Don’t miss the museum that is situated above the metro station that is full of inventions and oddities from the 18th and 19th centuries.

It is set to be the most beautiful metro station in the world with its gold-plated walls, huge marble walkways and space-age designs. One of the biggest names in architecture, Zaha Hadid is in charge of the design of this station. King Abdullah of Saudi Arabia is funding the station and demands that the metro be ready to use by 2019. The stations will be powered by renewable energy and the façade will be designed to let light in while keeping out the harsh desert sun, there is no need to worry about sweating here, this metro will be fully air-conditioned. The overall shape is meant to look like the country’s sand dunes and will feature raised elevators along with other beautiful finishes. Ground was broken in August 2014 and construction started on what promises to be the most beautiful station in the world.

The city hall station is normally closed to the public but visitors can get down here by taking a tour offered by the New York Transit Museum. This station was built largely as a ceremonial terminal for local government dignitaries and only operated for forty years, from 1904-1945 due to lack of space. Arched ceilings with Guastavino tiles, ornate skylights and the grandest subway architecture that this city offers awaits visitors here. If you don’t want to take a tour but still want to see this wonderful piece of history, stay on the 6 train after its final Brooklyn Bridge stop. As the train makes its turnaround to loop back, riders can catch a glimpse of this beautiful station, lost in history. You will wonder why every other station in New York doesn’t look as good as this one.

In a city where the average high temperature in August is over 100 degrees, you may want to escape the heat and head to the spotless and air-conditioned metro station. This just isn’t a normal metro station though, it can be described more of a museum of Dubai’s history. The theme of this station is water, depicting Dubai’s history of fishing and pearl diving. Fiber optic chandeliers hang from the ceilings which result in looking more like breathtaking jellyfish, tiled floors are done in brilliant blues and gold, and the blue mood lighting above makes this station absolutely magnificent. The station is spread over three floors and like everything else in the city; it oozes luxury and cleanliness.

It seems that nothing can top the dimpled tunnel walls of the metro station here in terms of impressiveness. This city has truly transformed its underground system into a visual spectacle with its art initiative that challenged world renowned architects and designers to overhaul the subway. The Toledo Station that opened in 2012 is amongst its most impressive, featuring mosaics by artist William Kentridge and a seascape made up of LED wall panels. The wall between the ground and lower level is made up of thousands of Bisazza tiles that move from light to dark blue as passengers travel down the escalators. This station was designed around the theme of water and light and passengers will hardly believe their eyes as they wander around, taking in the unusual effects. In a city that is known for its vandalism, it is impressive that this metro station remains unscathed.

The Stockholm underground is actually considered the world’s largest art gallery and nearly all of the stations resemble and art gallery or museum. In fact these are so awe-inspiring, many miss their trains as they admire the art work. There are more than 140 artists who are represented across 90 of the station including both permanent and temporary exhibits. The highlight of this underground system is the T-Centralen station where all three stations meet. The blue line section was painted back in 1970 and huge lines of blue and white adorn the walls and ceilings as well as rustic arches and columns decorated with mosaics. It doesn’t matter which station you head to here, they are all ultimately beautiful and fabulous. Spend all day riding the metro and discover a whole new world of underground art.