It seems that France was created with hundreds if not thousands of opportunities to snap the perfect photo, as it is loaded with 2,000+ miles of shoreline, seven major mountain ranges and a slew of urban vistas, valleys and plains. Getting up high here is easy, as a rooftop is often just a short but steep climb away, as are the cliffs that are beckoning to be traversed. Prepare yourself for some of the most beautiful views from these seven different places around France.

It was once a fortified structure for military purposes that sat atop this 92m hilltop overlooking the Nice Bay but was destroyed in 1706 by order of Louis XIV. Nowadays the place has been turned into a park and garden, where locals come to hang out and where tourists stop to take in the incredible views. To reach the park visitors have a couple options, the first is to walk up montee Lesage and climbs the steps at the eastern end of rue Rossetti, while the second lets you take the elevator up from under Tour Bellanda. Either way you reach this park, expect views of the sapphire sea stretching out below you, the Baie des Anges and the old port. Complete with palm tress and promenades, this is quintessential Riviera. 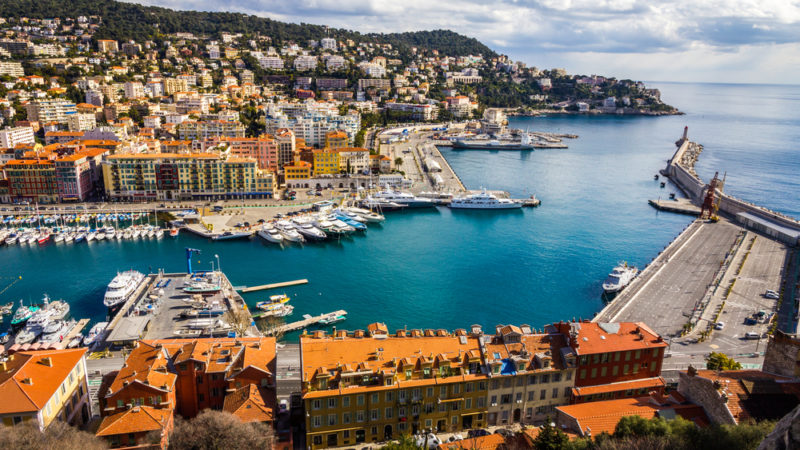 The Aiguille du Midi is a 3842m peak in the Mont Blanc massif of the French Alps, and about as close as you can get to the summit of Mont-Blanc without actually hiking to it. It also happens to be one of the highest mountain peaks served by an aerial lift system. For those of you looking for one of the most stunning view in France, head to the center of Chamonix Town where you can catch a ride on the cable car. The cable car brings you to the summit terrace where you will have a clear view of Mont-Blanc and the surrounding mountains. If you dare, step out into the glass room that is suspended above the chasm for the ultimate experience. Also from the terrace visitors can get on-board the Panoramic Mont Blanc cable car, which connects France to Italy offering astounding views along the 5km journey. The top station on the Italian side offers 360-degree views of the Mont Blanc massif. 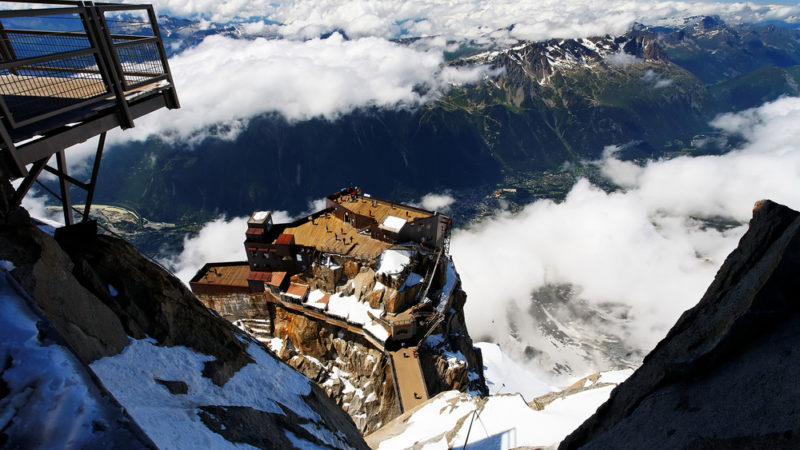 Provence is full of awe-inspiring views, green hills, tiled roofs, shimmering lakes and meadows bursting with lavender and sunflowers. Haut-de-Cagnes is one of the best-preserved perched villages and make sure you catch the view from above of the medieval city walls, stone archways and cobbled streets. Avignon on the other hand offers miles of lavender fields as well as an impressive view of the world’s most famous one-fifth of a bridge from Doms Rock. Sit yourself at anyone of the café tables in Gordes, Roussillon and Menerbes where you can watch the world pass by below, as well as look onto miles of green hills and tiled roofs, all while sipping an impressive glass of rose. 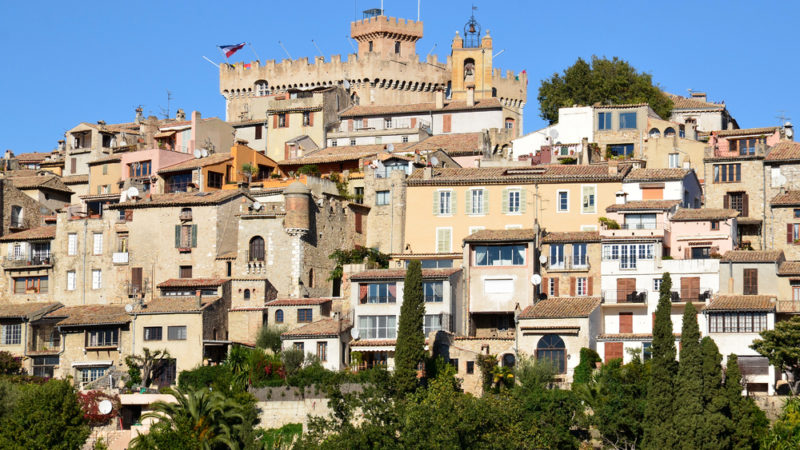 This National Park sits in the south of France between Marseille and Cassis and those visitors looking to take advantage of the best views here should hit the many hiking trails. There are about 12 walk able miles in this park that run along the coast, offering the best of views. Think steep-walled inlets the contain pools of sparkling seawater, sandy beaches that stretch on for miles and white limestone cliffs. Try to avoid visiting from June to September as the risk of fire is high and many of the beaches are closed. It is easy to pause along the trail and imagine that you are deep in the Caribbean as you look our onto the pale rocks and the color of the water that sparkles beneath the sunlight. 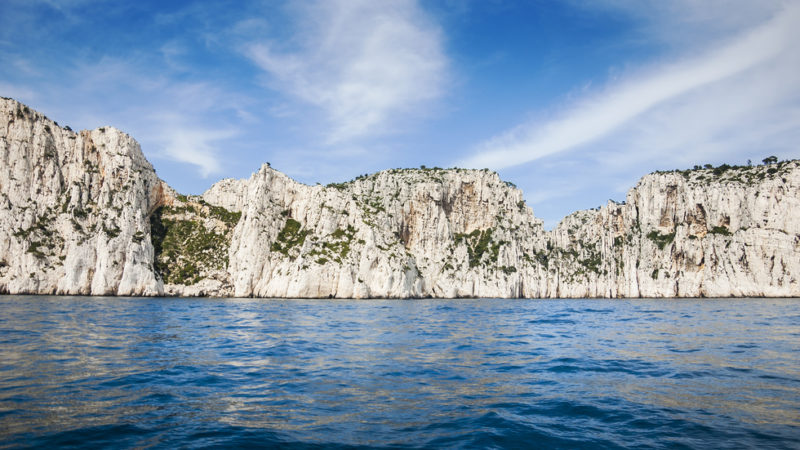 It is one of France’s most recognizable landmarks, an island commune in Normandy that held strategic fortifications since ancient times, and has been the seat of the monastery since the 8th century AD. The abbey and monastery sit on top in a gravity-defying move while the great halls, stores and housing all fall below it. Visiting here shouldn’t be missed for a couple reasons. One is the view from the top out into the bay; on a sunny day visitors can see for miles and miles. Make sure to look down at the surrounding village while you are up there. The second view though is actually from afar, like many iconic buildings this Norman abbey is perhaps even more beautiful from a distance. At the turn of the 20th century a French politician even went for far as to call the seaside route by Champeaux, between Avraches and Granville, the “most beautiful kilometer in France”. Head to this vantage point on the northeastern coast of the Mont Saint-Michel Bay for a view that makes this look like a castle adrift in the sea. 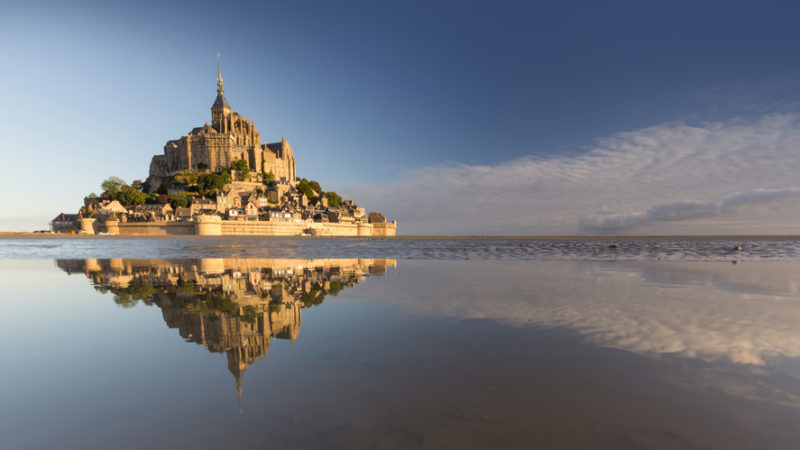 For visitors looking to combine an incredible view with a sacred experience, make sure to head the Basilique Ste-Madeleine in Vezelay, one of the largest Romanesque churches in France. Pilgrims have been climbing the hill to the Abbey of la Madeleine for centuries, not just for the religious aspect but we imagine for the incredible views that await visitors at the top. Below stretching out are the green, blue and gray hills of Burgundy, overflowing with vineyards, rivers and forests that sprawl out as far as the eye can see. If you happen to visit during summer or winter solstice, a special view awaits you as the church was designed so that on midday on each solstice, nine pools of sunlight fall upon the exact center of the nave, forming a path of light leading to the altar.

Nothing screams France more than the Eiffel Tower, and it simply wouldn’t be a list of beautiful views without including this majestic looking building. It is seemingly perfect from every angle and we suggest viewing it at both day and night. In the evening there is no better view of it from a boat on the Seine, when the tower shimmers both above Paris and in its reflection in the river, helped by the sparkling lights that it puts off for five minutes every hour. The view from the Eiffel Tower also deserves special recognition. The third platform has one of the best views over Paris, stretching about 70km on a clear day, all the way to the outskirts of the capital. If you want finer detail of the city itself, head down to the second platform where you will see all of the city’s most famous monuments. 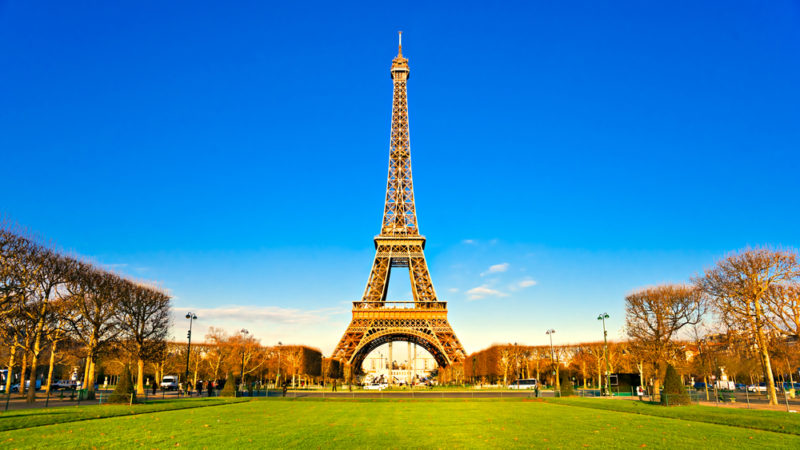