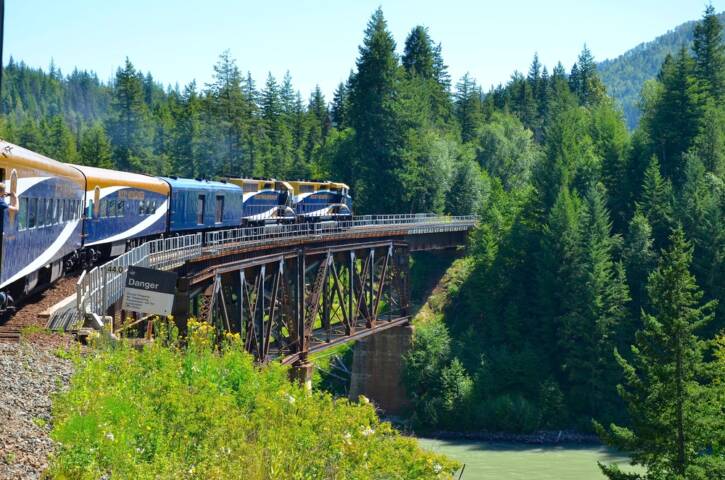 In the 21st century, train travel has been displaced by other modes of transport, like air travel and automobiles. But many travelers laud the experience of train travel; it’s often faster than a car and, unlike air travel, it allows you to see the landscape as you roll along toward your destination. Reflecting this, many train operations now offer luxury tours for travelers who want to ride in style without missing an opportunity for exploration. Combining amazing scenery, national treasures and elegance, here are 10 of the coolest train rides around the world.

Travel through India on this amazing train journey. Five different routes are offered, departing from either Mumbai or Delhi. Choose from a four day journey or an eight day grand tour of some of the most famous and majestic places on the Indian subcontinent. Partake in Hindu rituals at the ghats of the Ganges or witness a polo match played not on horses, but on the backs of elephants. From ancient civilizations to the Taj Mahal, you’ll see palaces and museums, national parks and beaches on the Heritage of India tour. On the Indian Splendor tour, you’ll have a chance to explore an abandoned kingdom and a dinosaur fossil park. Departures are limited, usually once per month between October and April, so if you want to travel on the Maharajas Express, you’ll want to plan in advance.

Train travel is almost synonymous with the American West; train service was the glue that held the nation together until the mid-20th century. The Grand Canyon Railway captures the Old West feel with its stops at historic train depots and the El Tovar hotel, which was built in 1905. The railway has a number of unique passenger cars, including the dome cars that are peculiar to American railways. Two of the luxury parlor cars feature open-air platforms for observation. Trains depart the Williams depot daily and arrive at the south rim of the Grand Canyon National Park two hours and 15 minutes later. The trains return to Williams around 3:30 in the afternoon. Along the 65-mile journey, the train passes through diverse terrain of the high Sonoran desert and mountainous areas, and passengers might sight any number of animals, including pronghorns, and a variety of plants. 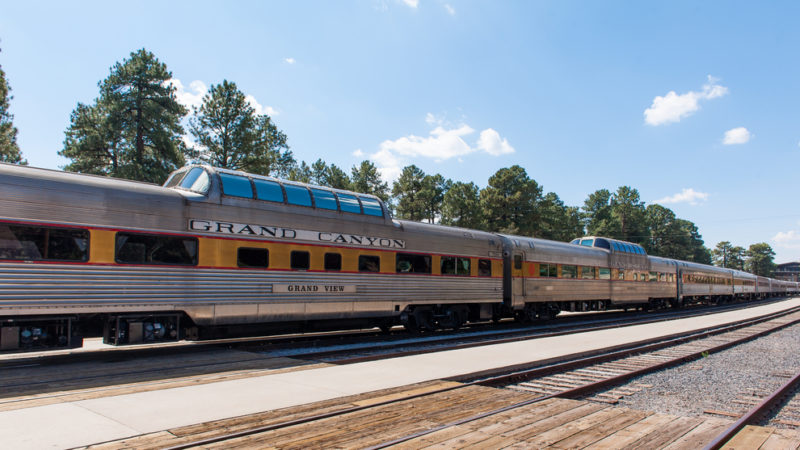 Connecting Darwin at the northern tip of the Australian continent and Adelaide on the southern coast, The Ghan makes one of the most fascinating trips in the world. The Great Southern Rail-operated train travels almost 3,000 kilometers over the span of 54 hours, with a four hour stop over in Alice Springs. The train originally ran between Adelaide and Alice Springs, beginning operations in the late 1890s; it wasn’t until 2004 that Darwin was connected. The reasons are obvious: the route runs through vast swaths of the rugged Australian Outback. With the new train in operation, getting to Darwin and seeing the Outback has never been easier, although delays and track trouble still plague the line. Stops at Katherine and Alice Springs allow time for optional tours. The Ghan generally runs once a week, although two services operate weekly between June and September. 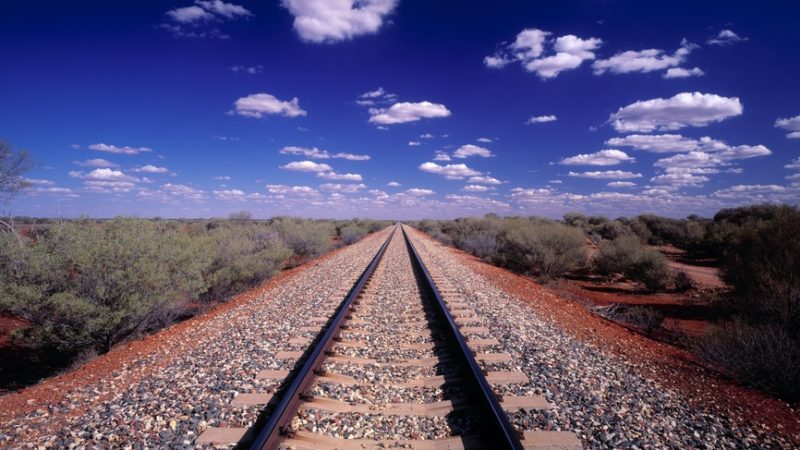 The South African Blue Train is world-renowned for its luxury service, boasting butlers, two lounge cars, an observation car and private carriages with gold-tinted picture windows. The train takes passengers nearly 1,000 miles between Pretoria and Cape Town. Originally, the service was meant to connect passengers from Johannesburg to England-bound ships in Cape Town. There was a time when four routes were offered, but all have been discontinued except the route between Pretoria and Cape Town. The train makes at least one stop in either direction, allowing guests to explore the Open Mine Museum at Kimberley Station or enjoy a glass of sherry at Matjiesfontein. The journey takes passengers between inland and coastal areas, showcasing the spectacular scenery of the South African landscape. Passengers will journey across scrubland, through mountain foothills and across rivers in the height of luxury. Bring formal wear for your dinner engagement. 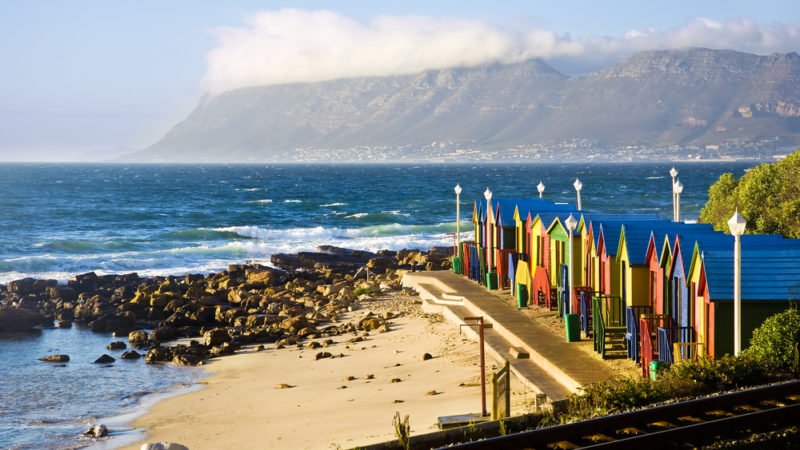 Not just a single line, the Trans-Siberian Railway is rather a collection of lines that traverse the huge expanse of the Siberian hinterland, connecting European Russia with the Russian Far East, the Sea of Japan and branching into Mongolia, China and North Korea. It is the longest railway in the world, spanning 5,772 miles from Moscow to Vladivostok, and is still being expanded. Even before its completion in 1916, it had become a hotspot for travelers, who then wrote about their experiences. The journey from Moscow takes about six days and crosses seven time zones before dropping passengers on the Pacific Coast. The line is still incredibly important for the transportation of goods and people between Moscow and the Russian Far East, and its historical importance cannot be underscored enough. The journey might not be the most luxurious, but it is certainly a fascinating view of Russia. 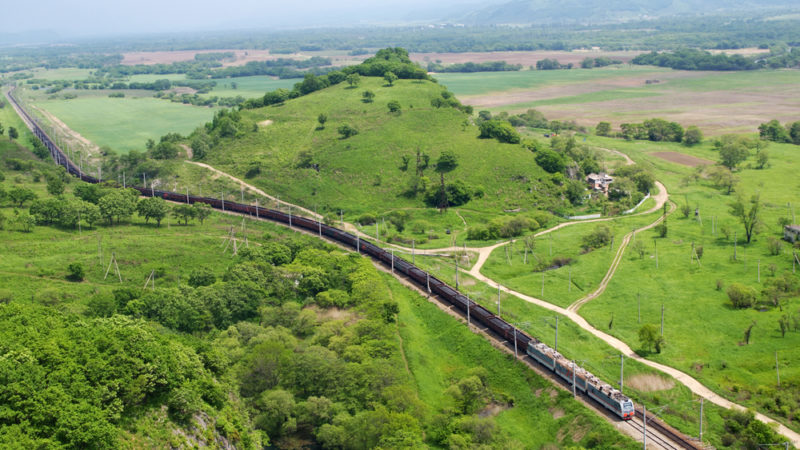 If you look at many top-10 lists for rail travel, you’re almost bound to run into the Royal Scotsman, a luxury liner that offers charter tours of the Scottish Highlands in the UK. With a variety of tour options, ranging from two nights in the Highlands to the seven night Grand Tour of Britain, the journey makes plenty of time for stops at local attractions, such as castle ruins, whisky distilleries and iconic natural wonders. Some journeys even include outdoor pursuits like shooting clay pigeons. As you travel, the observation car provides spectacular views of the glens, lochs and villages that make up the Highland vistas. Dining makes use of the best local ingredients and experiences are mixed between formal and informal. Combining luxury with an amazing tour of the Scottish landscape like you’ve never seen before, it’s little wonder the Royal Scotsman ranks highly on so many travelers’ bucket lists!

While the Glacier Express isn’t a very quick trip—in fact, it has a reputation for being the slowest express train in the world—you probably won’t mind as you pass through the Alps between St. Moritz and Zermatt in Switzerland. The 7.5-hour journey takes passengers across 291 bridges, through 91 tunnels and across the Oberalp Pass. Large portions of the railway use a rack-and-pinion system for ascending through the steep Alpine inclines—up to 6, 670 feet at its zenith! Running east-west almost across the length of the country, the train travels through a number of important sites: the Albula/Bernina section of the trip are part of a World Heritage Site and the train journeys through the Rhine Gorge and up to the Matterhorn in Zermatt. Since the 1980s, the trains have run year-round, which means this spectacular trip can be enjoyed by travelers no matter the season. 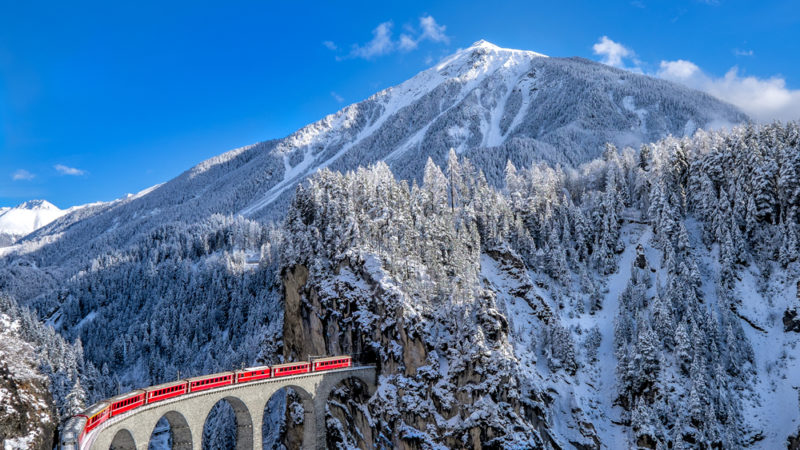 The Oriental Express is an actual train service, journeying through the Southeast Asian countries of Thailand, Malaysia, Singapore and, since 2007, Laos. The tour starts in Singapore and stops in Kuala Lumpur, Butterworth and Kanchanaburi before arriving in Bangkok. A guided tour of the River Kwai and a tour of Georgetown, near Penang, are included on the most popular route, although there are nine routes to choose from. The Singapore-Bangkok route takes three days to complete. The journey has been awarded a place on the Society of International Railway Travelers’ “Top 25 Trains” list, earning points for service, dining, beauty and off-train experiences. The service is operated by Belmond, a renowned name in luxury train travel, and is considered one of the best ways to explore Southeast Asia. In 2015, two new “signature journeys” were introduced.

Hop aboard this luxury liner and ride the rails between the city of Cusco and the ancient Inca capital of Machu Picchu. This ride consistently makes the top-10 lists for travelers visiting Peru, and not only because it heads up to the sacred Inca city. Part of the Orient Express, the train operates in both directions and is named after the discoverer of Machu Picchu. Combine slithering through the soaring Andes in the Incan outback with fine dining and a relaxing four hour trip. Guests have brunch on the trip to Aguas Caliente, and dinner if they catch the late train back to Cusco. A local band provides live entertainment during the trip and guests can sample the Peruvian drink pisco as the train rumbles alongside the Urubamba River, which flows from the Sacred Valley. The observation car features an open deck for passengers to better enjoy the view! 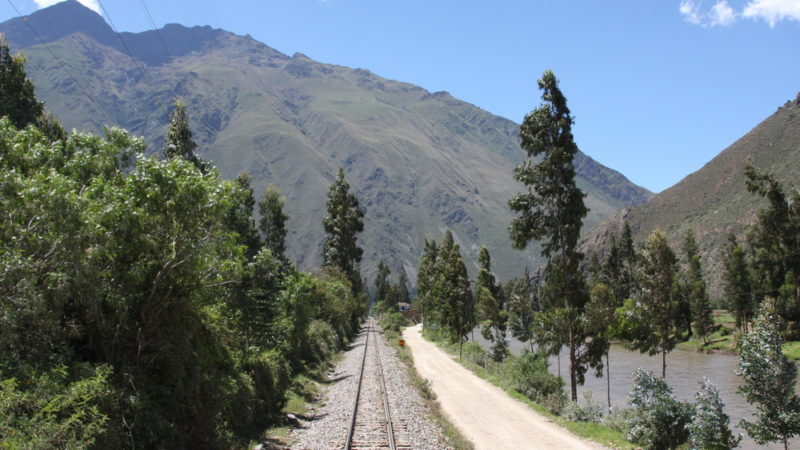 The Rocky Mountaineer isn’t one route, but four routes running between Alberta and British Columbia in Western Canada. Formed in 1990, the company operates the busiest privately owned passenger rail service in North America, with more than one million passengers having boarded the train since its inception. The Rocky Mountaineer is a perennial favorite among train travel enthusiasts, having been named the “World’s Leading Travel Experience by Train” seven times and the Society of American Travel Writers’ top train ride in 2009. All four routes run through the rugged Canadian Rockies, some of them following historic routes such as the Canadian Pacific. In 2013, it was announced that a three day trip from Seattle would be offered. All trains operate during the day, with some overnight stops, between May and September. The “Journey through the Clouds” takes passengers over the Canadian National railway through the Rockies, between Vancouver and Jasper.