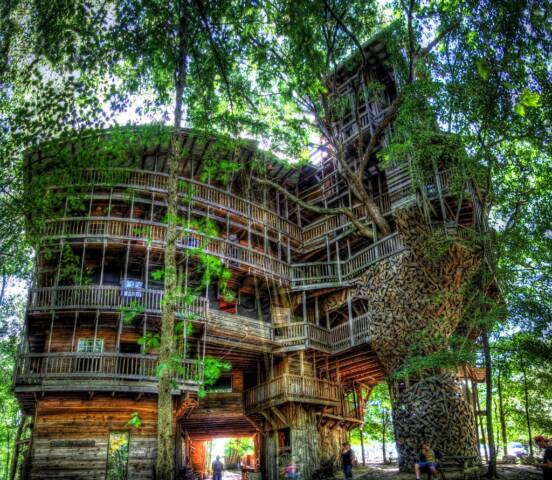 Do you ever get tired of checking in to the same old cookie cutter hotels? You know the kind, you can’t tell the difference unless you walk outside and look at the sign. Next time you travel try something a little more fun, in some cases just plain strange and wacky. There are wacky hotels all over the world like the Kumbuk Hotel in Sri Lanka made of grass in the shape of an elephant. If you live in the US you don’t necessarily have to travel across the world to find wacky hotels. We have listed a few a little closer to home.

Winvian Farm is a 113 acre resort consisting of a major dating to 1775, 18 cottages, a suite and some unusual accommodations. The Hadley Suite is 950 sq. ft. with a wood burning fireplace, Jacuzzi and steam shower while the cottages vary in size and decoration. The room that catches everyone’s eye is the Helicopter Suite. A 1968 Sikorsky Sea King Pelican HH3F helicopter has been fully restored and awaits those eager to spend the night aboard. Your suite comes with pilot and copilot seats along with a few modern updates such as sofa and flat screen TV. Housed in a “hanger” you can sip cocktails while dreaming of flying through the skies. The king size bed site in the hanger next to the helicopter so if you get the urge to play pilot during the night it is only a few steps away. 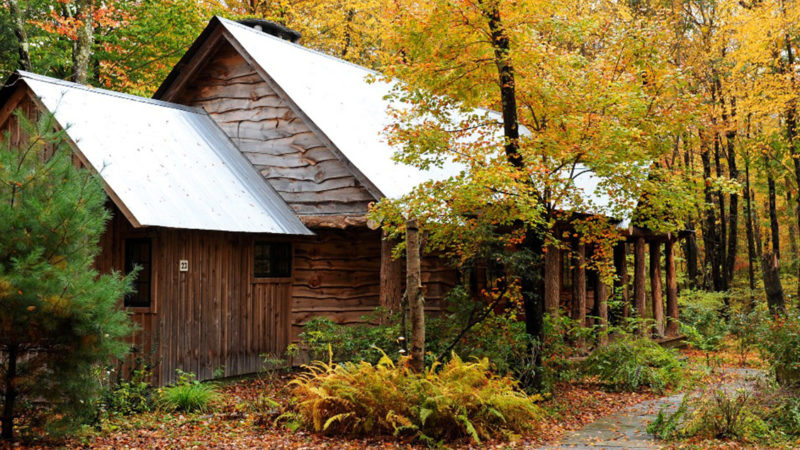 Step back in time to when things moved a little slower, families took long vacations and if you were lucky you had a sleek trailer in tow so you could set up and enjoy the outdoors with all the comforts. The Shady Dell originally began in 1927 when people traveling needed a place to stop and relax. Today you will find nine vintage travel trailers and a 1947 Chris Craft Yacht restored and available for rent. Trailers come complete with bedding, dishes and coffee maker but cooking is not allowed and no open campfires on the grounds. The park is only open part of the year so check in advance. Oh, one more thing. Unlike when the family cruised down the road with the dog in the back and dad puffing on a Lucky Strike cigarette The Shady Dell has a policy of No Smoking, No Pets and No Children under 15 years of age. 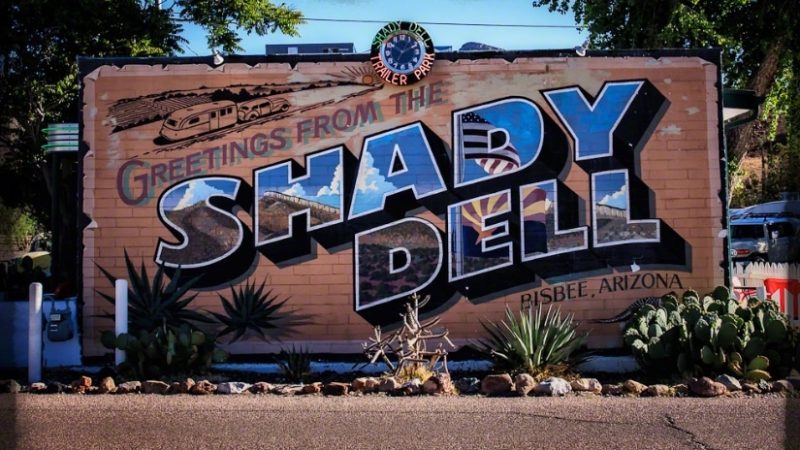 Until 1997 the small town of Cottonwood Idaho had one big thing in town, which was the Monastery of Saint Gertrude. But then Dennis and wife Francis began carving dogs using chainsaws. One thing led to another and Dog Bark Park and Inn opened. It was only natural that the carving got bigger and pretty soon the Inn was built. The Inn is complete with queen size bed, two folding beds in the loft, full bath and continental breakfast featuring home baked pastries and the family’ secret recipe for fruited granola. Pets are allowed, of course, and a shop where you buy the artwork that Dennis and Francis make is on the premises. There is no phone or television so plan on spending the day outside with your pet or take a drive and check out the monastery. No word on whether the monastery allows pets.

Located one mile south of the town of Goliad Texas the Presidio La Bahia was established in 1749 and since 1853 has been owned by the Catholic Church. In the mid 1960’s a major restoration took place and in 1967 it was designated a National Historic Landmark. After the restoration the quarters was used as the residence of the priests and today is rented out to the general public for nightly stays. Located on the west wall of the old presidio the quarters is a two bedroom apartment with three beds. Included are living and dining areas with a fireplace, master bedroom, kitchen, bathroom and shower. Guests can come and go as pleased and take time to explore the mission grounds during their stay. With access via a back door to the mission you can relax in the courtyard, admire the chapel and contemplate history. 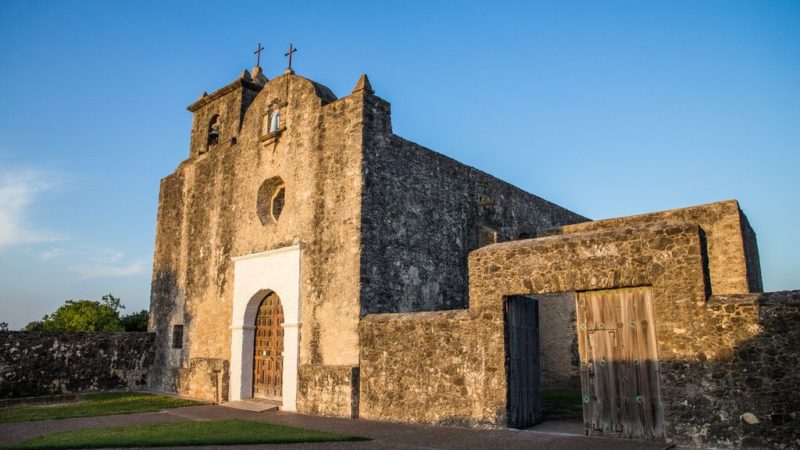 Located in northern New Mexico just outside Farmington you are greeted by the beautiful La Plata River Valley and Kokopelli’s Cave B&B. Carved into the sandstone cliff is a 1700 sq. ft. manmade cave. The cave comes with master bedroom, living area, dining area, kitchen and a bathroom with a waterfall shower and Jacuzzi tub. Being in a cave the temperature stays between 68- 73 degrees year round. The cave also has two porches with sliding glass doors so you can enjoy the views. Since there is an abundance of wildlife no pets are allowed. The cave is 70 feet below the surface and the only way to get there is to embark on a hike then take the trail down to the cave utilizing steps carved into the sandstone. It is probably best not to try and bring lots of luggage, instead pack a backpack.

Built in 1949 on historic Route 66 in San Bernardino, The Wigwam Motel saw it’s heyday during the golden age of roadside Americana when gas stations, motels and restaurants were built in shapes to attract the motorists enjoying the newly created highways. Gone are the Barbasol Shaving Cream road side signs and not too many restaurants in the shape of tea kettles still exist but the Wigwam is still standing. Originally there were seven Wigwam Motels spanning Route 66 from Kentucky to California due to an innovative entrepreneur named Frank Redford. Today only three are still intact. One in Kentucky, one in Arizona and Wigwam number 7 in California. The rooms are fairly small but come with free Wi-Fi, a pool and all the atmosphere of days gone by. 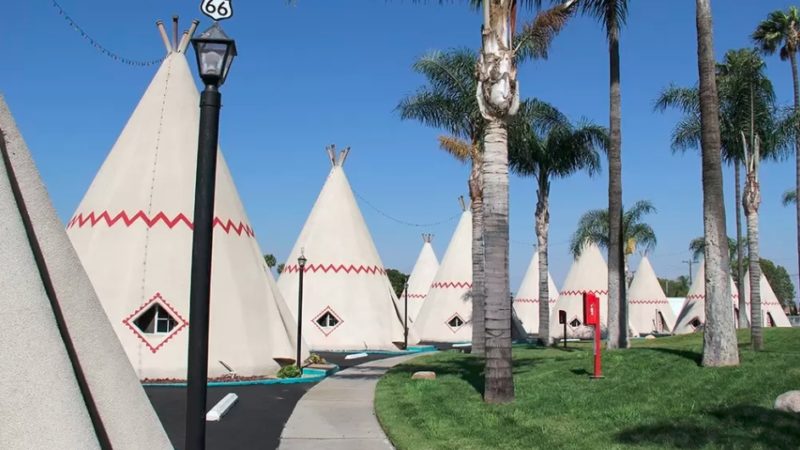 If you want to get off the grid and take a break with no crowds then head to the Cedar Creek Treehouse. Located near Mount Rainier National Park the treehouse sits 50 feet up a 200 year old redwood tree. There is also a 100 foot treehouse observatory so you can get an unimpeded view of the surrounding forest and a floating treehouse that are seen by tour which is included in the rental rates. The Treehouse uses solar power, has plenty of windows and comes with a small kitchen, a sleeping loft with futons, dining area and while it has a bathroom there is no shower. With five flights of stairs you don’t need a fitness center but you can go swimming in the nearby creek. There is no restaurant but you are invited to fish for native trout and can cook it up on the campfire. A two night stay is required and the rates are almost as high as the treehouse at $650 for a couple. 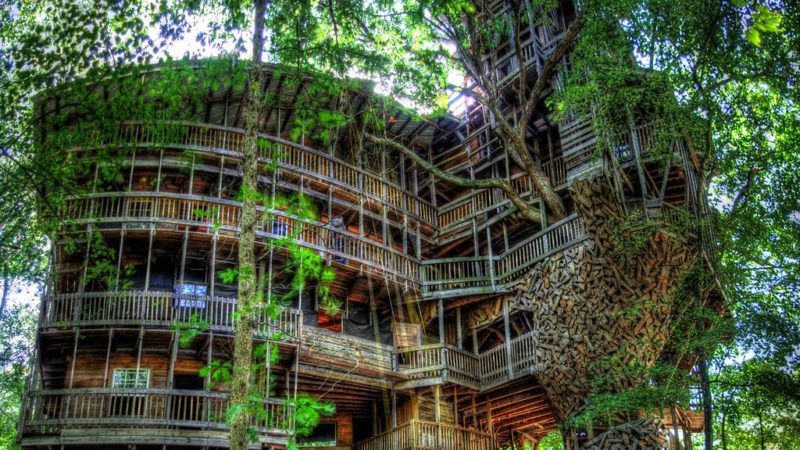 What once was the Charles Street Jail and temporary home of Malcom X, and Sacco & Vanzetti, underwent a $150 million renovation and reopened as the Liberty Hotel in 2007. Architects took extra care to preserve as much of the original features and history of the old prison. The Clink restaurant still has the original jail cells which create cozy nooks for dining while the Alibi Bar is located in what was once the jails drunk tank. The yard, now turned into outdoor dining can accommodate up to 250 people while the catwalk dining area is reserved for hotel guests only. Where you could once spend the night for free, by being picked up for drunk in public or some other crime, a stay now will cost a little more. Rates run from $465 to $6000 for the penthouse suite. 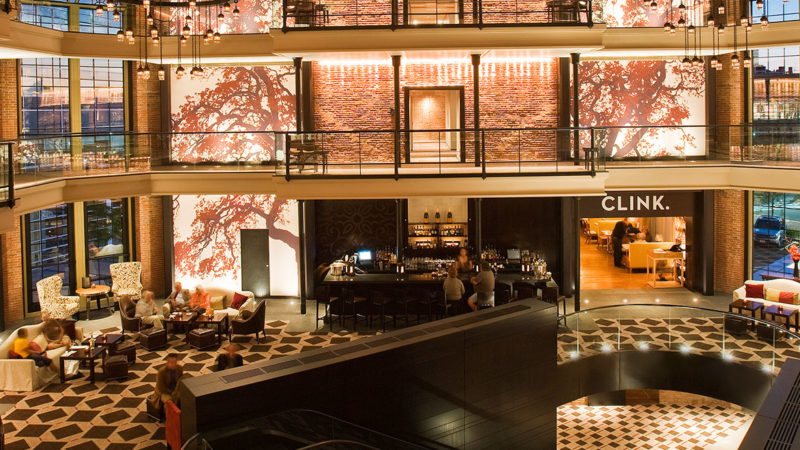 Unless you are a certified scuba diver you will need to take a discover scuba course to stay at the Jules’s Undersea Lodge. The world’s first underwater hotel started off as an underwater research lab. Named after Jules Verne the author of “Twenty Thousand Leagues Under the Sea”, the hotel sits 21 feet underwater in a lagoon. The hotel has a list of requirements in order to take the scuba course and be able to stay at the hotel. The hotel has two private bedrooms and a common room where you can dine or look out the 42-inch round window and view the marine life and a chef is available to dive down and prepare a meal. You can book a 3-hour visit and enjoy a pizza lunch for $150 or spend the night which will run $800 per couple. The hotel has attracted a few celebrities over the years including Aerosmith’s Steve Tyler and Canadian Prime Minister Pierre Trudeau. 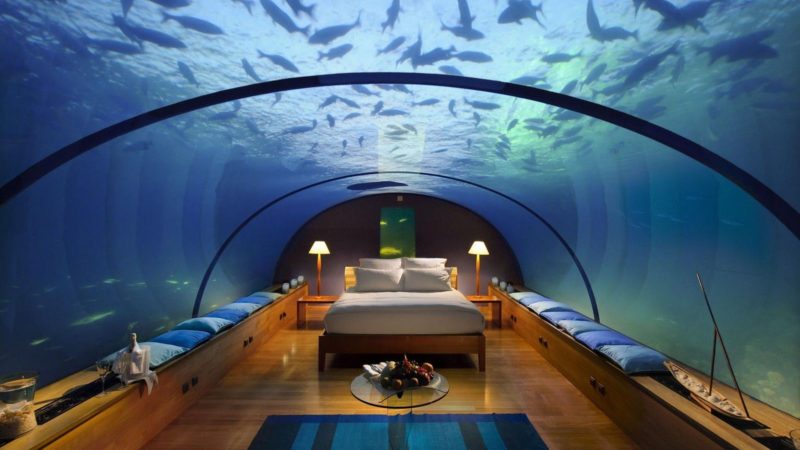 If you are a Blues lover then you probably know that the Mississippi Delta is the home of the Blues. Located on what was once a plantation the Shack up Inn serves up cold beer, blues music and the opportunity to spend the night in an authentic sharecroppers shack. The two-room shacks have been renovated from the original just enough to give you a few comforts but keep the experience as authentic as possible. As stated on their web site “The Ritz we ain’t”, no discounts, no room service, no phone and the only wakeup call you will get is if you don’t check out on time. Guests can enjoy live music, head to the nearby Blues Museum in Clarksville or just relax in the rocker on the front porch of your shack with a bottle of beer in hand and imagine the music of Muddy Waters, Charlie Patton, John Lee Hooker, and others.