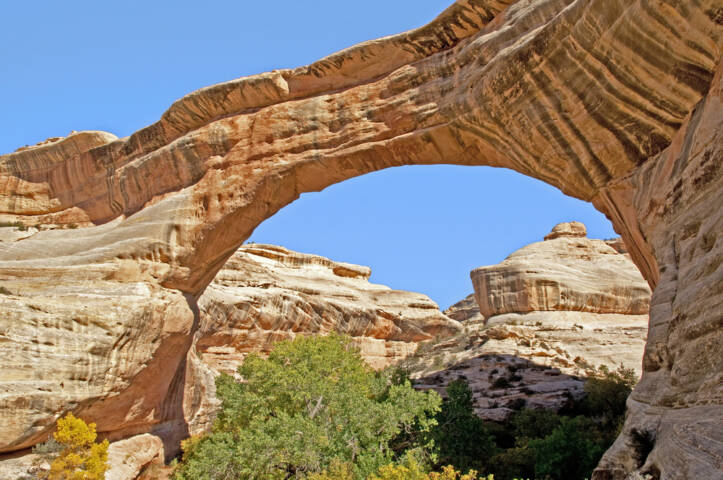 The rugged, dry desert conditions of Utah don’t conjure images of powerful rushing water but the evidence of such activity still remains today at Natural Bridges National Monument in the state’s southeast.

This seemingly desolate area was deemed a National Monument in 1908 but was inaccessible for many decades as the closest settlement was a 3-day ride on horseback. That is until the uranium boom of the 1950’s, which brought new roads and infrastructure so more visitors were able to make the trek to see this awe-inspiring feat of nature.

Natural Bridges are formed by the process of erosion, and in this case the flow of water over the Colorado Plateau through White and Armstrong Canyons has resulted in the incredible landscapes that can be witnessed today. This national monument site features 3 amazing natural bridges carved out of the rock which can be appreciated from an overlook, the Bridge View Drive which winds through the area passing all 3 bridges, or hike the trails and stand at the base of these mega monuments for a true understanding of their sheer size and architectural significance.

Each bridge was given its own Hopi name to represent the indigenous roots and people who once inhabited the area. Sipapu, the largest of the three bridges means ‘the place of emergence’ and was named so as it was the entryway the Hopi people believed their ancestors entered this world. Owachomo bridge which means ‘rock mound’ was named so for its geological feature on the east side. It’s also the bridge most at risk of collapsing as it’s only 9 feet (3m) thick at it’s crest. The third bridge, Kachina was named for the rock art found on it which resembles that seen on Kachina dolls, artifacts from the Hopi people. Another important site which doesn’t include a bridge is Horsecollar Ruin site, which is an ancient Puebloan ruin site abandoned more than 700 years ago. From an overlook a short hike from Bridge View Drive, you can view the remarkably well preserved structures.

If the bridges aren’t enough reason for you to visit this naturally formed spectacle of Utah, maybe the wildlife is a draw. The canyons and surrounding area are home to many species of birds, rabbits, rats, lizards, mule deer, mountain lions and several species of snakes including the pygmy rattlesnakes. Another very cool draw is that Natural Bridges Monument was named the world’s first international Dark-Sky Park by the International Dark-Sky Association in 2007 so it’s a great place for star-gazers and those that just appreciate the beauty of the night sky. 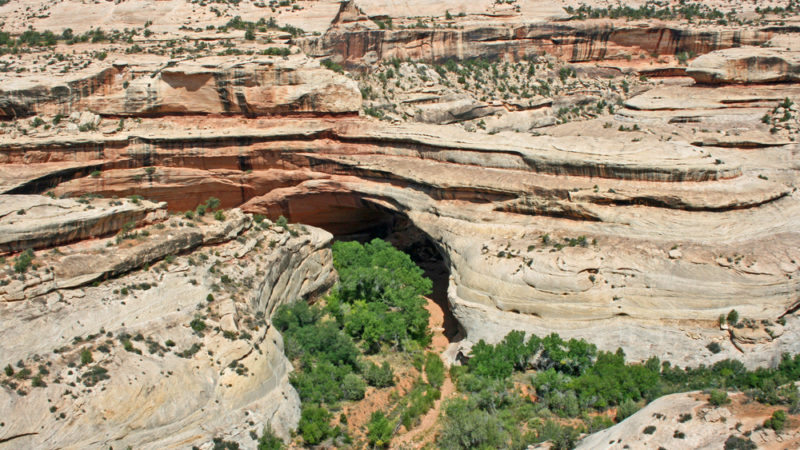 The park is open year round and admission is just $6 per vehicle or $3 per person on foot. There is no on-site restaurant or lodge but you can bring your own amenities and stay at one of 13 sites in the park’s campground to immerse yourself in the beauty of this natural site.