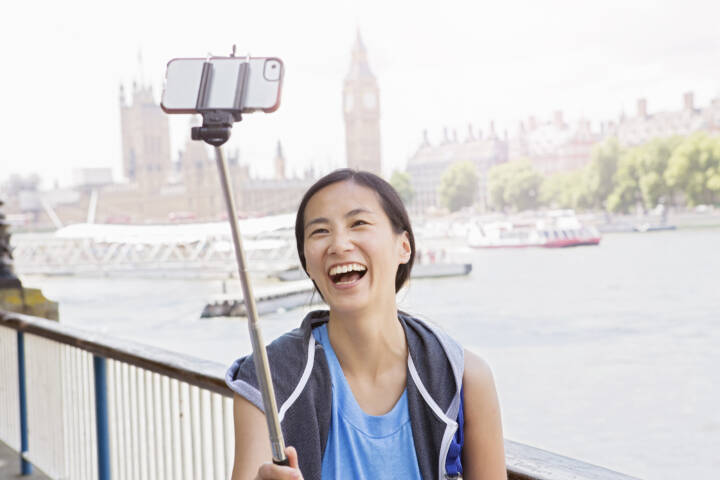 The ongoing trend of taking selfies shows no sign of slowing down and it appears that the longer the trend goes on, the more outrageous the selfies become. From high-tech Bluetooth selfie sticks to snapping a photo with a wild bear; there seems to be no end to this pop culture phenomenon. People and places are beginning to come down on the selfie craze stating that it is dangerous, damaging, and something that needs to be banned in certain places. From outrageous fines to jail time, every place around the world is dealing with selfies differently. Discover why the French has set up zones on a pristine beach in Southern France banning all selfies, find out why South Korea is banning all un-certified selfie sticks and learn how dating sites have contributed to some of the most dangerous selfies that can be taken. Join us in discovering eight #NoSelfie places around the world.

They have dubbed it “No Braggies Zone” but what they really mean is “NoSelfies” on this popular beach in Southern France. Targeting those who want to “brag” about their holidays to people back home with Facebook posts, Instagram posts, and pictures; this beach has designated two zones on the beach to be “Brag Free”. Two signs are posted warning visitors of this and authorities are taking this ban seriously. The Holiday Spam Police as they are called will be on the lookout for those visitors wanting to capture the ever-popular “selfies”.

The Garoupe beaches are amongst some of the finest beaches in all of France and the beach authority wants visitors to enjoy the beaches rather than spending the majority of time bragging to friends and family back home. The major crackdown is on celebrities who in the past have been known to post numerous pictures of their spectacular holidays. These celebrities will be handed an outright ban if caught posing for pictures. This ban isn’t for the whole beach season as of yet but only implemented during the holiday rush for two weeks in August.

South Korea hasn’t gone so far as to ban selfies but instead has cracked down on the use of the ever-popular selfie-sticks. A selfie stick is a short or long pole with a clip on the end that is designed to hold a mobile phone or small camera; making it easier to take selfies from further away. The selfie stick operates through Bluetooth in order to trigger the shutter and thus South Korea has declared that all selfie sticks must be tested and certified as they are considered telecommunication devices.

If you are caught selling an un-certified selfie stick the price is high; up to a $3,000 fine or up to three years in prison. There is no word on what happens if you are caught using an un-certified selfie stick but chances are you won’t be let go with just a slap on the wrist. The reason behind this harsh crackdown appears to stem from the worry that these devices will interfere with other technology such as medical equipment that also uses radio waves. With more cellphones in use than people; who can blame the government for wanting to regulate this business?

Younger generations taking “selfies” on their annual Islamic pilgrimage to Mecca known as The Hajj have come under scrutiny by Islamic clerks and scholars. Interestingly enough camera phones were banned in the holy mosques up until the last few years but are now considered a normal part of this journey. Just last year a fatwa was issued declaring that selfies are a “form of unacceptable irreligious self-worship”.  It seems that authorities are confused on this issue as a startling number of selfies erupted from last year’s pilgrimage without any consequence.

Selfies taken during this journey are thought to be a touristy distraction from the prayers and rituals that are taking place and are seen as destroying the tranquility and humility required for the acts of worship. In fact, some scholars and clerks have gone so far as saying that the only reason young Muslims are taking this once-in-a-lifetime journey is to capture it on camera to show their friends and family. Only time will tell how the authorities crackdown on the selfie craze on this time-honored religious journey.

New York State has become the first U.S state to ban the selfie; but only if you are taking a photo with a lion, tiger, or other big cats. Specifically, the law prohibits direct contact between members of the public and big cats at traveling animal shows and fairs. Animal exhibitors who disobey this law can face fines for each violation. The law was passed not only to protect wild animals but also the people who love these animals.

Some may say that social media sites and popular dating sites are to blame for this law as males, in particular, started posting more and more photos in close proximity to these creatures. In particular, “tiger selfies” are becoming increasingly popular and dangerous. Lawmakers are denying that big cat selfies are the reason for this ban and instead are letting the public know that these types of photos encourage the mistreatment of these endangered animals. Either way, the “tiger selfie” categories on popular sites such as Tinder and OkCupid is about to go down in the dust.

This next selfie ban was put in place to protect human lives and few can complain about that. Officials in the Northern region of Pamplona, Spain have put a ban on taking selfies during the Running of the Bulls. The law actually states that anyone who puts lives in danger by filming or taking photographs during the running of the bulls can face serious fines of up to €3000 Euros. Since 1924 when record-keeping started taking place, 15 people have perished from this controversial event and organizers are trying to keep that number low.

A number of bull runners have already been charged including a man who attempted to take a selfie as the bulls were mere inches behind him and narrowly missed being gorged by one. The picture went worldwide and was called by some “one of the best examples of human stupidity we have ever witnessed”. This selfie ban seems pretty straightforward to us in protecting not only the one snapping the picture but those around him as well.

Organizers are encouraging fans to take selfies elsewhere around the park with twenty designated “selfie zones” and have even created a special hashtag; #aoselfie for the event. Organizers have set these zones up in what they consider the best places to capture the infamous selfie. Fans and competitors were still seen taking numerous selfies throughout the park and even courtside during the 2015 event but organizers say that majority were obeying the no selfie stick rule and were capturing them with their handheld devices only. Time will tell what the next few years bring in terms of banned pictures at major sporting events.

A controversial ban on selfies is taking place amongst many countries around the world involving polling booths. While some countries such as the Netherlands have embraced the pictures which are also nicknamed “boothies”; other countries are taking a stand and letting voters know that they can be fined or jailed. The UK’s Electoral Commission has made it illegal to snap a selfie if you are a returning officer that was involved in the previous year’s local and European elections. They have also made it known that people who tweet photos of themselves and their ballots can face a fine of up to €5000 Euros or 6 months of jail time.

According to the law, it is a criminal offense to reveal who you voted for and to reveal the security number on the ballot. Belgium has outright banned the selfies along with South Africa who is encouraging people to take pictures outside the voting booths. The flipside of the arguments comes from experts who say that these poll booth selfies are encouraging the younger generation to vote. The Dutch are the most outspoken and liberal on this hot topic and encourage their voters to live-tweet during the voting process. The voting laws are complex so it will be interesting to see how the rest of the world reacts to the selfie craze when elections take place.

This next selfie ban comes from a conservative country that has a pretty specific set of rules and has come out of a sporting event that didn’t happen on Iranian soil. The head of the Iranian Football Federation’s moral committee has banned any players, coaches, or team staff members from posing with any female fans. The reason behind this ban is the worry that these pictures may be used by females for political gains or to even sue players for harassment.

This no selfie ban shouldn’t be hard to abide by in Iran; as women are already banned from attending any male sport in the Islamic republic. The ban on the players really comes into effect when they travel to anywhere outside the republic and the female fans flock to watch them; such as the Asian Cup in Australia in early 2015. Players have been warned they will face serious consequences if caught taking selfies with female fans.

Another area that has banned selfies with wild animals in Lake Tahoe in California. The ban is on “bear selfies” and can be considered almost as unbelievable as the no tiger selfie ban in New York State. Not only is the bear selfie incredibly dangerous to both humans and the bears but authorities say that the area is overrun with people trying to snap these photos. Incidents have gotten so bad that a mother and baby cub were actually followed off the trails and across a creek by a group of people trying to get that selfie.

As cute as these bears are Lake Tahoe officials are trying to warn visitors of the danger. Bears that feel crowded and threatened will lash out and can be deadly. If this bear selfie problem persists much longer authorities of Lake Tahoe say the area that attracts the most bears will be closed to the public as the endangerment to people and bears is too high of a risk. The choice remains with the public for now; forget the bear selfies or ruin the experience for everyone else.