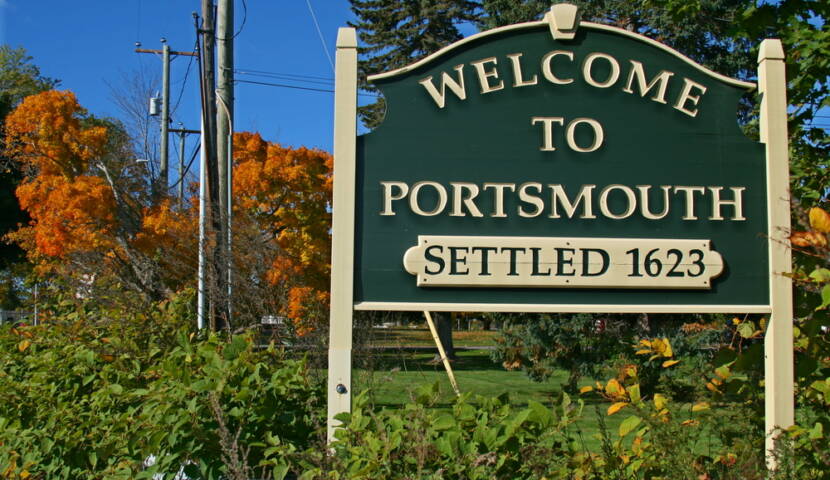 Summer is drawing to a close; kids are back to school and there’s a frosty feel in the air at night. This year’s fall equinox is September 23, marking the official start of the autumn season in the northern hemisphere. One of the most exciting things about fall is the fantastic display in the forests and countryside, as plants turn a myriad of brilliant colors—reds, golds, browns and oranges speckle the vibrant landscape. The following 8 destinations are good viewing points for nature’s radiance; pick a clear and crisp autumn day to get out and enjoy nature’s beautiful hues.

Nestled away in the Adirondack Mountains, Lake Placid is part of the Tri-Lakes area in Essex County, New York. The village is well-known to outdoor enthusiasts; its renowned for its winter sports scene, including skiing and bobsledding. In fact, it hosted 2 Winter Olympics (1932 and 1980). The area is also great for mountain climbing and hiking. The area, much of it now parkland, is the southernmost part of the Eastern forest-boreal transition ecozones, and includes pine, spruce and deciduous trees. Almost 60% of the Adirondacks park is covered in northern hardwood forest. Tree species include sugar maple, white ash, American beech and yellow birch, which make for a spectacular mix of colors, from the showy maple trees to the reliable colors of the ash trees. Take a hike through some of the mountainous trails and enjoy the scenery rolling across the hills. 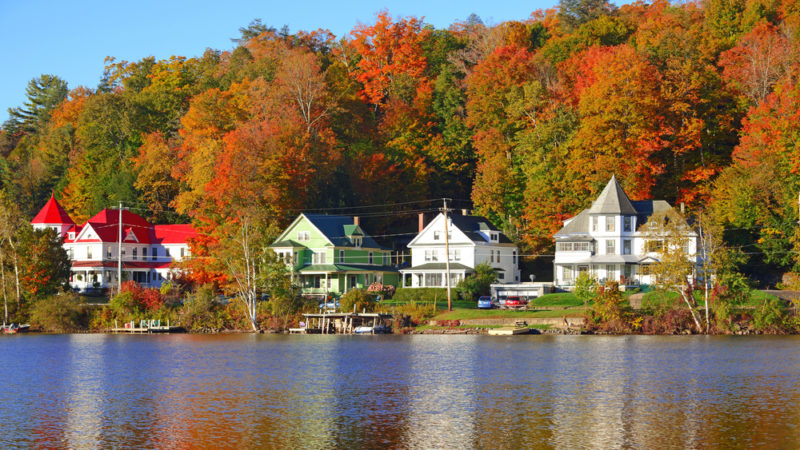 Cape Breton, part of the province of Nova Scotia, is Canada’s 18th largest island. Its geography is widely varied, including plateaus, headlands and glacial valleys, along with mountains and, yes, forests. The northern part of the island, known as the Cape Breton Highlands, is home to the Cape Breton Highlands National Park. The forests here are mixed between the Acadian forest and Boreal forest, which is found at higher elevations. You can hike the Cabot Trail or the Skyline Trail, which wrap around the park’s coast line. The forests of the area are home to many species of pine and spruce, but their deciduous inhabitants include birches, beeches, maples and oaks. Cottonwood and poplar species turn brilliant yellow in autumn, adding sunny colors to the canvas alongside the deep reds and oranges of maples and oaks. Visit the Beulach Ban Falls in the Aspy Valley for some spectacular fall colors. 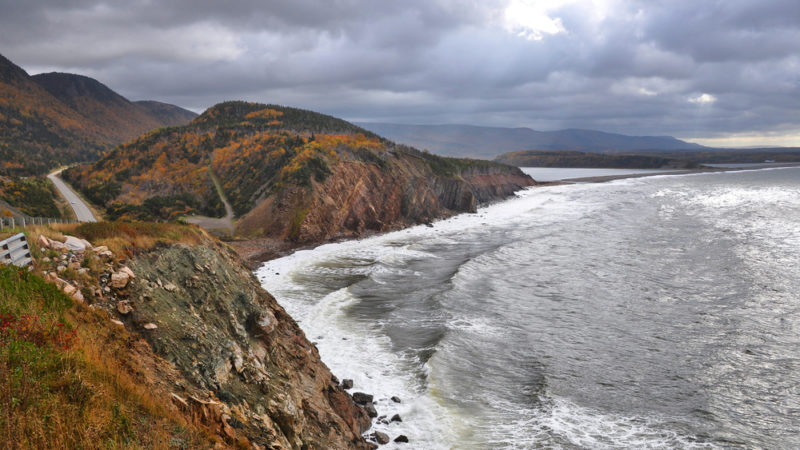 The west usually isn’t the first stop on people’s list when they think of fall foliage, but the forests of the Rockies put on a good show, giving the eastern Appalachians a run for their money. Aspen, Colorado, is named after a tree and there are plenty of aspens around. Their foliage turns a beautiful golden-yellow hue in the fall and even seems to shimmer in the breeze. They provide a perfect contrast to the background of the evergreens on the craggy mountains. The biggest problem, however, is that viewing season is short: onset happens mid-September and by the first week of October, most of the trees will have shed their leaves. That means you have about 3 weeks to get out and see the colors. If you happen to be in the area anyway, be sure to take the time to appreciate the splendor of Mother Nature’s palette. 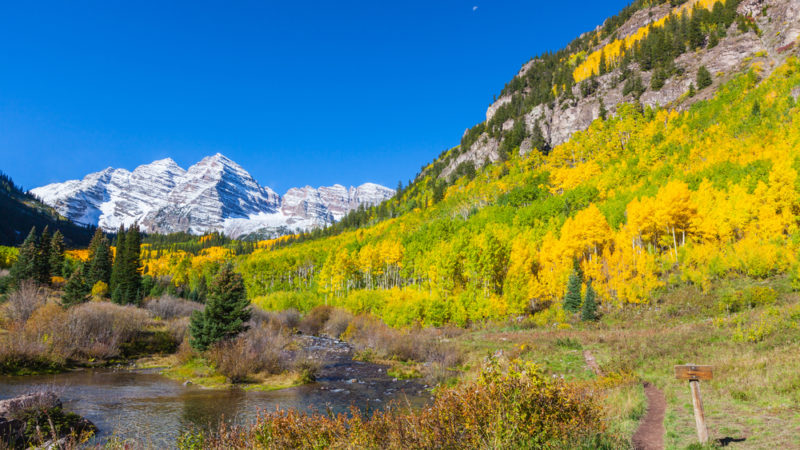 Vermont is renowned for its forests—they give the state’s iconic Green Mountains their name, after all—so it should be little surprise that there’s a number of great places to view fall foliage in Vermont. Ludlow, in the Okemo Valley, is one of those places. Although it’s often passed over for the Green Mountain Byway, Okemo Mountain provides a 360-degree view of the Green Mountains and the valley. Ludlow is surrounded by prime viewing spots: the Scenic Route 100 Byway will take you to Coolidge State Park and the President Calvin Coolidge State Historic Site with their mountaintop views. The area shares similarities with the Adirondacks and Cape Breton forests, which means the autumn colors are a splendid mix of reds, oranges and yellows, thanks to the mix of trees like maples, birches and poplars. 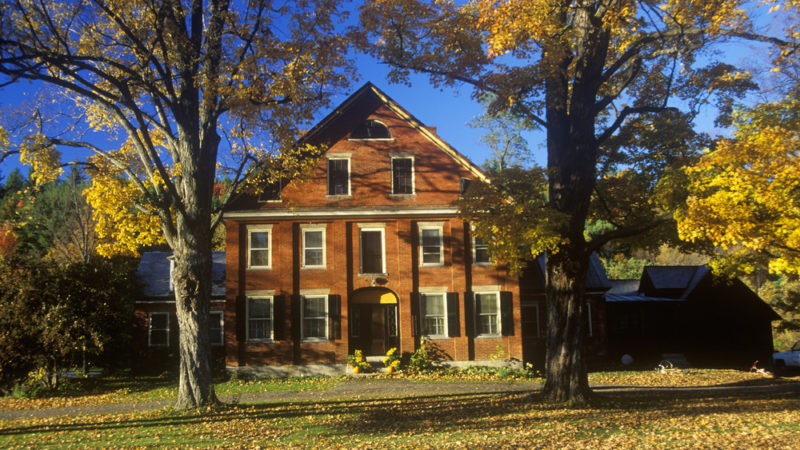 It’s hard to go wrong picking a fall foliage destination almost anywhere in New England, but Portsmouth, New Hampshire, might be a good selection. Although it is somewhat famed as a historic seaport (and the end of Paul Revere’s infamous 1774 ride), Portsmouth is like many New England towns—awash in early American colonial history and endowed with ample tracts of northern hardwood forests that offer up the colors of maple, oak, ash, beech and birch in the fall. The town has restored 17th-century buildings along its waterfront district and the 10-acre Strawberry Banke Museum, where you can wander as you take in the fall foliage. By car, you can enjoy the fall colors by cruising down the 18-mile Coastal Byway. You could also hop on an inland river cruise; there are a few dedicated to highlighting the fall foliage. 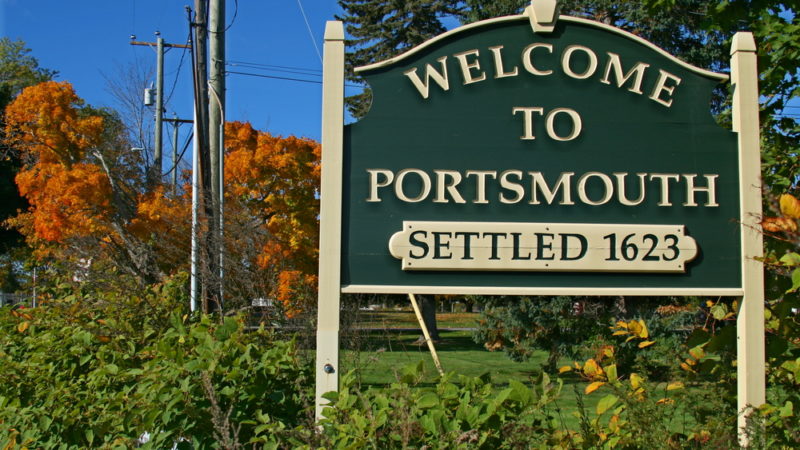 Lenox is an affluent town nestled away in the Berkshire mountains of Massachusetts. The town was once part of nearby Richmond, but because the mountains pass between the 2, they were eventually divided into 2 towns. The Housatonic River flows through the east side of Lenox, and parts of the Housatonic Valley Wildlife Management Area and the October Mountain State Forest line the east banks of the river. October Mountain rises further east and in the west, Yokun Seat is the highest peak at 2,146 feet. The Pleasant Valley Wildlife Sanctuary is also in the area, to the south of Yokun Seat. What all of this means is that there are a lot of wilderness spaces around Lenox and a lot of trees. Leaf-viewing season usually starts October 1; the Jacob’s Ladder section of U.S. Route 20, a 35-mile stretch near Lenox, is popular for taking in fall foliage. 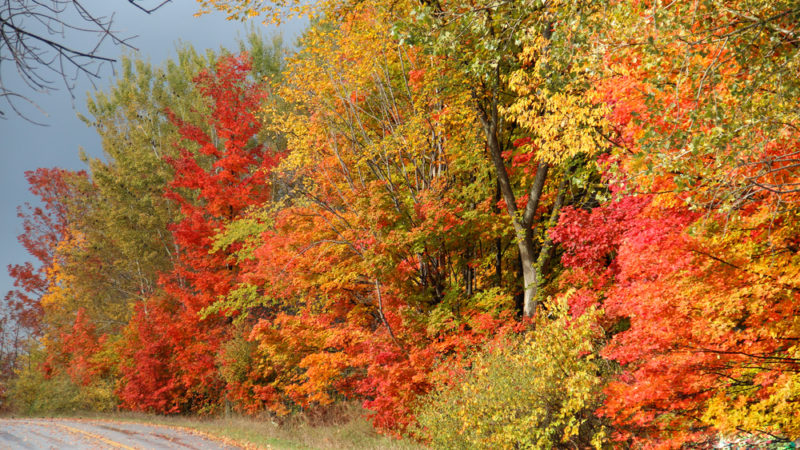 Mont-Tremblant, approximately 80 miles northwest of Montreal, is perhaps most famous for its skiing. Long a winter destination for snow bunnies, the area actually hosts a number of sporting events throughout the year and presents great opportunities for activities like hiking, ziplining and cycling. Mont Tremblant, at just under 3,000 feet, is one of the tallest peaks in the Laurentian Mountains of Quebec. Dense boreal forest in the area promises a mix of evergreens splashed with color from aspens, birches, willows and rowan. Larches, one of the most common trees in the boreal biome, also turn color in the fall, adding a distinctive yellow hue to the forests. Take a tour along the Via ferrata du Diable, which offers a hybrid hiking-climbing experience, in nearby Mont-Tremblant National Park. The path is open until October, making it a unique way to view the autumn colors. 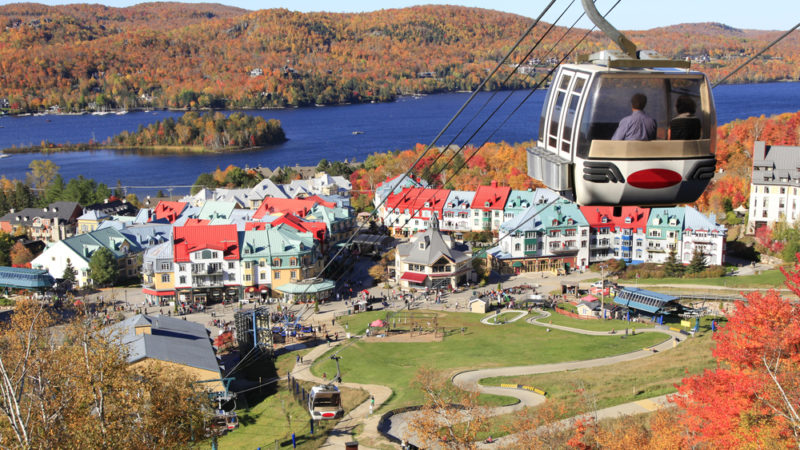 This 105-mile stretch of highway in northern Virginia winds through Shenandoah National Park. It features almost 75 mountain overlooks and forests chockful of colorful sumac, locust, sassafras, scarlet oak, red maple and sweet gum trees—a combination that makes for a brilliant blending of reds and yellows that stretches on for miles. October is prime viewing month for the colors in the park. If you have time, pick up the Blue Ridge Parkway and continue through the southern part of the state, into the Great Smoky Mountains in Tennessee. If you prefer to go on foot, Shenandoah National Park has over 500 miles of trails through the Blue Ridge Mountains. The park is about 75 miles from Washington, D.C., making it a great place to escape the hustle and bustle of the nation’s capitol and get back to nature. 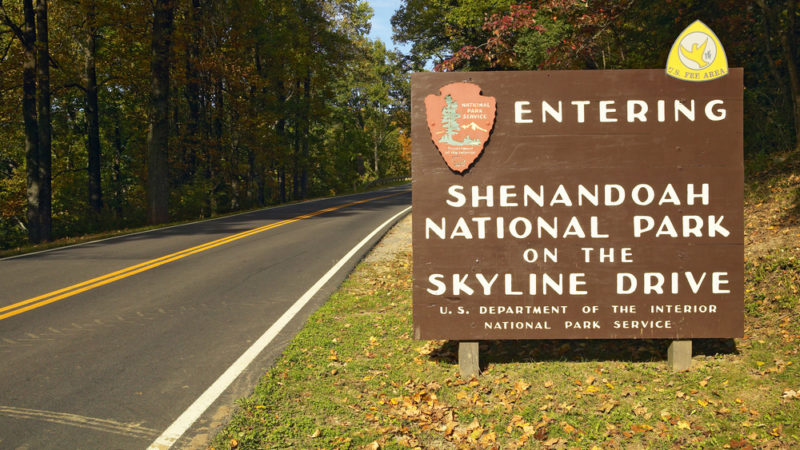